Melbourne Stars are expected to continue their winning streak by handing 6th defeat for the Scorchers.

Perth Scorchers are placed at bottom of the table with five defeats from six matches and will be facing the Melbourne Stars who won three in a row after losing two in two. Both the teams have lost some of their key players including the skippers for this fixture due to the home ODI series against India. Nic Maddinson, recovering from a fractured arm suffered in early December during a JLT Sheffield Shield match, will lead the team on his BBL debut for the Stars. Jonathan Merlo and Tom O’Connell have also been named in the Stars squad.

They take the place of Glenn Maxwell, Adam Zampa, Peter Handscomb and Marcus Stoinis. Nick Larkin has also been approved by the Technical Committee to replace Handscomb in the squad having originally been an injury replacement player for Nic Maddinson. Mitchell Marsh, Jason Behrendorff and Jhye Richardson will be replaced by Usman Qadir, Sam Whiteman and Aaron Hardie in the squad. The Technical Committee has approved Local Replacement Aaron Hardie to come into the squad for Joel Paris due to injury.

The 25th match of the Big Bash League (BBL) 2018-19 will be played between Melbourne Stars and Perth Scorchers at the Melbourne Cricket Ground.

The Melbourne pitch has of late been a ground for the chasing sides as each of the previous 11 completed Twenty20 games have been won by the teams batting second. The track at the MCG stays on the slower side pushing the side batting first to aim for big totals and end up with below par scores.

Nick Larkin has turned out to be a proper replacement player for the Stars as he scored 137 runs in five innings at an average of 45.67. The 28-year-old has 20+ scores in four of the five matches including two 40+ scores.

Dwayne Bravo is expected to play a key role in the absence of a big name for the Stars. The likes of Bancroft, Turner and Maddinson might have a good game with the bat. Coulter-Nile can be considered as vice-captain. 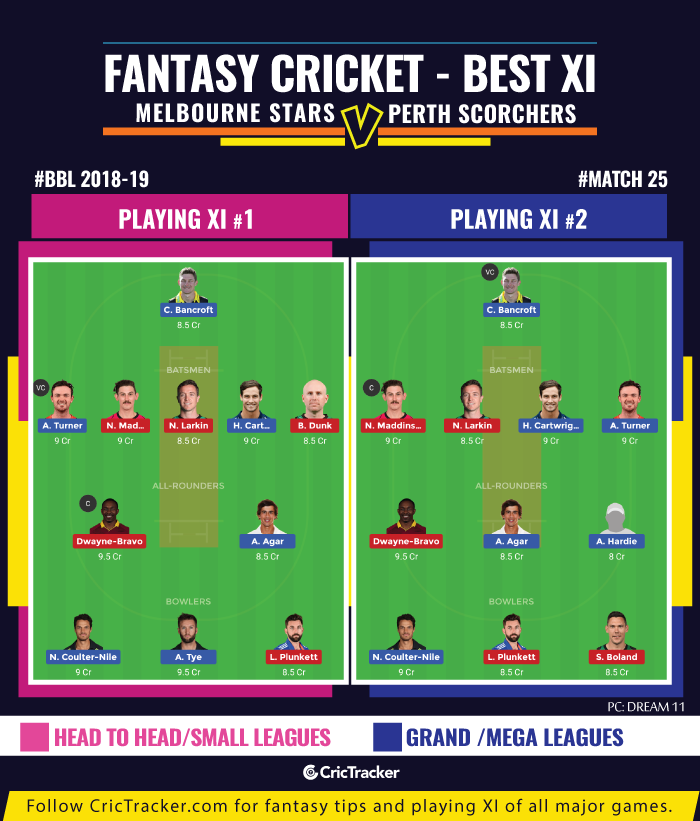 The players on both sides included for the first time can make a difference, especially in the grand leagues. The likes of Maddinson, Hardie and Kelly could make a difference in their first appearance.

Melbourne Stars are expected to continue their winning streak and had Scorchers their 6th defeat.