Both are virtually knocked out of the tournament.

Match 48 of the ongoing Big Bash League (BBL) will see two bottom of the table teams locking horns. Brisbane Heat and Perth Scorchers are seventh and eighth in the points table at the moment and have been knocked out of the tournament as well. They are playing for nothing but pride now and can still ruin the other teams’ season going forward. But the result of this game wouldn’t change anything as far as the BBL concerned.

Though Heat would still argue that they have an outside chance to qualify to semi-finals. But the way they’ve played this season doesn’t infuse confidence in anyone that they will be able to win all their remaining matches. Moreover, they will also need a lot of results to go their way to go through to the knockouts. Chris Lynn, the skipper, can only hope to bow out of the tournament on a high and don’t think much about the end result.

The Scorchers’ case is even worse than their opponents. The team never got their batting together this BBL season. Despite having the likes of Cameron Bancroft, Hilton Cartwright and the veteran Michael Klinger in the side, they failed to put up decent runs on the board. A brilliant bowling line-up was found wanting due to the same reason and it will be interesting to see how they fare in the remainder of the matches.

The last time, a BBL game took place at The Gabba, the floodlight failure abandoned the game and a lot of controversy followed. Moreover, the Heat are yet to win at this venue this season after three matches and would be hoping to give their something to cheer. The pitch is expected to be good for batting and the trend of bowling first after winning the toss should continue.

The weather will be cloudy during the match and there are little chances of showers but that shouldn’t affect the game much.

Sam Heazlett has come back in the squad and is in good form at the moment which should help him get back in the side. He is likely to replace Matt Renshaw while Mitch Swepson, out of the squad now, is likely to be replaced by Jack Prestwidge. But the likes of Max Bryant, Lynn and the veteran Brendon McCullum should take care of making the bulk of the scoring. Alex Ross and Jimmy Peirson have been in great touch and the inclusion of Heazlett will only bolster their batting.

The Scorchers have dropped Michael Klinger from the 13-man squad while Nathan Coulter-Nile also misses this match due to hamstring soreness. Liam Guthrie might replace Coulter-Nile while the rest of the line-up should remain the same. Shaun Marsh and Mitchell Marsh haven’t fired for them so far while Ashton Turner and Cartwright have blown hot and cold.

The prediction is for the Heat to register their first home victory of this season. 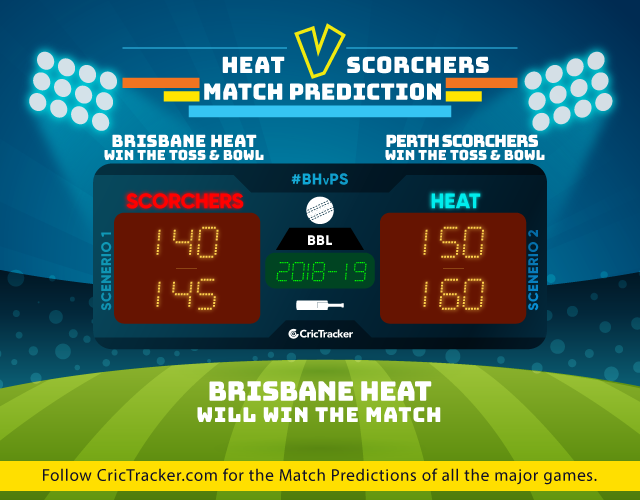