Stars are currently poised at the top of the points table by registering six victories from seven matches.

The extravaganza of BBL 2019-20 continues with another enthralling encounter with Melbourne Derby- Melbourne Renegades lock horns with Melbourne Stars in Match 30 of the tournament.

Despite strong batting performances from Sam Harper and Beau Webster, Renegades’ bowling force failed to spark against Scorchers. Richard Gleeson, who scalped three wickets while conceding 35 runs, was the solitary bowler for Renegades who left his mark. Aaron Finch and Co. will be eager to post their first victory before the tournament reaches its pinnacle stage.

Melbourne Stars, on the other hand, have been in a phenomenal run of form. Stars are currently poised at the top of the points table by registering six victories from seven matches. Stars, who are currently tied at 12 points with Sydney Sixes, will be hopeful of consolidating their top spot in the BBL 2019-20. The Glenn Maxwell-led side steamrolled Sydney Thunder in their previous match on the back of impressive performances from skipper Glenn Maxwell and Haris Rauf.

Rauf, the Pakistan speedster proved his worth yet again as he scalped a brilliant hat-trick in the ultimate over of the match to restrict Thunder to a score of 145 runs. Stoinis and Maxwell steered Stars’ batting attack in the run-chase as both the all-rounders smashed half-centuries to propel their side to the victory.

In the previous encounter at Docklands, both the teams ticked the 150-run mark on the scoreboard. A similar kind of a surface is expected to be dished out for this game. Moreover, both teams are equipped with many hard-hitters of the ball. However, it is expected to be a rain-marred match. There are high chances of showers to intervene in the match with the temperature hovering around 32 degrees Celcius, according to AccuWeather.

Skipper Aaron Finch has smashed two half-centuries in the tournament so far. However, Dan Christian will be leading Renegades in his absence. Sam Harper and Beau Webster have also delivered impressive performances with the bat lately. Richard Gleeson, who picked up three wickets in his previous match, will be eager to continue his wicket-taking spree. They will also miss the services of Kane Richardson due to international duties.

Stars’ are equipped with many match-winners in their squad. Glenn Maxwell and Marcus Stoinis are in sensational form this season. Both the players have the potential to turn the game in their side’s favour. Melbourne Stars’ bowling force will be steered by in-form Haris Rauf, who has garnered all the attention due to his recent heroics. Lamichhane will be heading their spin-bowling attack. However, they will miss the services of Handscomb and Zampa, who are out on international duties and Maddinson, who is sidelined due to injury. 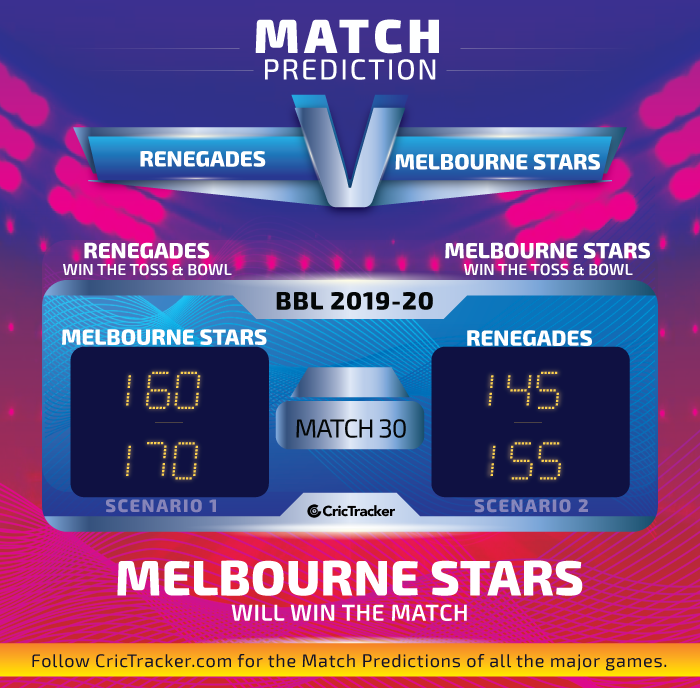