Jonathan Wells, who hogged the attention by smashing a brilliant half-century in his previous match, will be eager to replicate his heroics.

As the journey of BBL 2019-20 is progressing into its concluding stage, Perth Scorchers and Adelaide Strikers are set to lock horns in Match 51 of the fast-paced league. Perth Scorchers’ journey so far in the BBL 2019-20 has been a topsy-turvy one. In their twelve matches so far, Scorchers have gathered twelve points by winning six matches. They have currently squeezed into the upper half and are sitting fourth in the points table.

In their previous match against Sydney Thunder, Scorchers cruised to a dominating eight-wicket victory by chasing down a dominating total of 153 runs. The opening pair of Inglis and Livingstone left no stones unturned in Scorchers’ run chase as they stitched 136 runs for the first wicket to propel their side to the triumph.

Adelaide Strikers have fared well so far in BBL 2019-20. The Travis Head-led side has clinched the third spot in the points table by registering seven wins from 12 matches. The batting forte of Strikers was evident in their last match against Melbourne Stars, where they decimated Stars’ bowling force to cruise to the victory by 11 runs. Jonathan Wells struck a brilliant half-century to ensure that Strikers post a competitive total on the scoreboard. He was also assisted by wicketkeeper Alex Carey’s explosive cameo of 33 runs.

The wicket at Perth will assist the side batting first as it tends to get slower as the match progresses. In this season, three out of five matches at this venue have been won by the side batting first. The weather is expected to be perfect for a game of cricket to take place. There are no chances of rain whatsoever and the temperature is expected to hover around 31 degrees Celcius, according to Accuweather.

Perth Scorchers’ batting force comprises the likes of Josh Inglis, Cameron Bancroft and Liam Livingstone to propel them to a flying start. Skipper Mitchell Marsh has also been in sublime form lately with the bat and the ball. Their bowling unit will be steered by the likes of Jhye Richardson, Chris Jordan and Fawad Ahmed. Jordan emerged as the pick of the bowlers in Scorchers’ last match after scalping three wickets in his spell against Sydney Thunder.

Jonathan Wells, who hogged the attention by smashing a brilliant half-century in his previous match, will be eager to replicate his heroics. Strikers also have Salt, Carey and Weaherald in their batting arsenal. Rashid Khan has also delivered impressive performances in both the departments this season. Strikers’ bowling force will be steered by pacer Peter Siddle, who scalped four wickets in his previous match. The Australian speedster has scalped eight wickets in his last five appearances for Strikers. 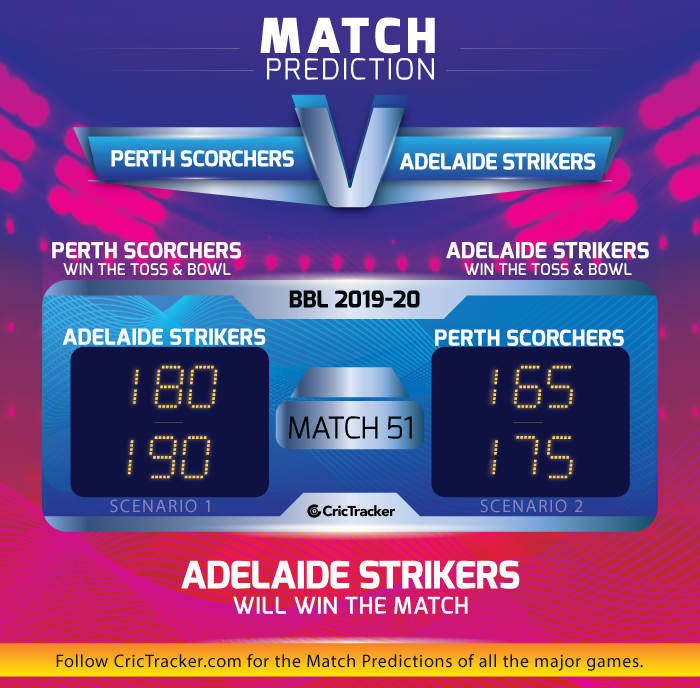