Both teams have shown excellent form in the tournament.

Sydney Sixers and Sydney Thunder are set to lock horns in Match No.50 of the 2021-22 BBL on Saturday, January 15 at the Sydney Cricket Ground. The Sixers, led by Moises Henriques, are placed third in the points table. They will go into the game on the back of a 45-run win over Melbourne Renegades.

A net run rate of 1.010 is also among the best in the tournament. The Thunder, led by Jason Sangha, on the other hand, are sitting pretty at second with 31 points from 12 games. In their previous game on Thursday, the Thunder lost to the Hobart Hurricanes by nine runs at the Docklands Stadium.

The pitch at the SCG has been an excellent one for batting. Bowlers may not have a lot to cheer for while bowling on the surface. The track isn’t expected to change nature and hence, batting second should be the way forward.

Josh Philippe has been exceptional for the Sixers in the ongoing edition of the BBL. In 10 innings, the right-hander has notched 327 runs at an average of 36.33 and a strike rate of 145.33. Having hit 27 fours and 13 sixes in the event, the youngster has been at his very best in recent times.

Hayden Kerr has been on top of his game in the ongoing edition of the BBL. The youngster has picked up 17 wickets from 11 games at an incredible bowling average of 11.41. He has only given away 168 runs from the 28 overs he has bowled thus far in the tournament. 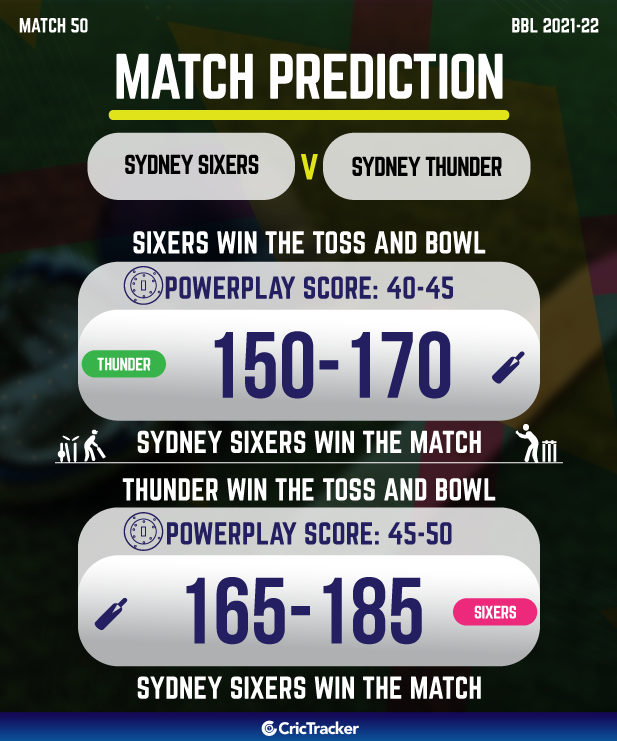