The Stars couldn’t have made a worse start as they suffered a humiliating 152-run defeat against defending champions Sydney Sixers in the season opener.

Match 7 of the Big Bash League (BBL) 2021-22 will see Melbourne Stars battling it out with Sydney Thunder in the iconic Melbourne Cricket Ground on Friday (December 10). The two sides have made contrasting starts to their respective campaigns and it would be interesting to see how the upcoming contest pans out.

The Stars couldn’t have made a worse start as they suffered a humiliating 152-run defeat against defending champions Sydney Sixers in the season opener. Hence, the Glenn Maxwell-led side has quite some work to do. On the other hand, Chris Green’s Sydney Thunder thrashed Brisbane Heat by seven wickets in their first assignment.

The track hasn’t been a high-scoring one in the past and hence, batters need to showcase application to get runs in this surface. With the dimensions of the ground being on the larger side, spinner would come in handy in the middle overs. The toss-winning captain must elect to bowl first as pacers might also get some assistance in the initial phase of the game.

The England opener might have bagged a duck in the previous clash. However, taking him lightly won’t be wise for the Glenn Maxwell-led side. Hales can attack bowlers from the outset and his ability to play big knocks makes him an even greater asset. Not to forget, he’s one of the most successful batters in BBL history.

The star leg-spinner was instrumental in taking Australia to the T20 World Cup title last month. Hence, there’s no reason why Zampa can’t replicate his heroics in BBL. The star bowler didn’t enjoy a great time the season opener, conceding 34 runs in four overs and going wicketless. However, he would be force to reckon with in Melbourne conditions. 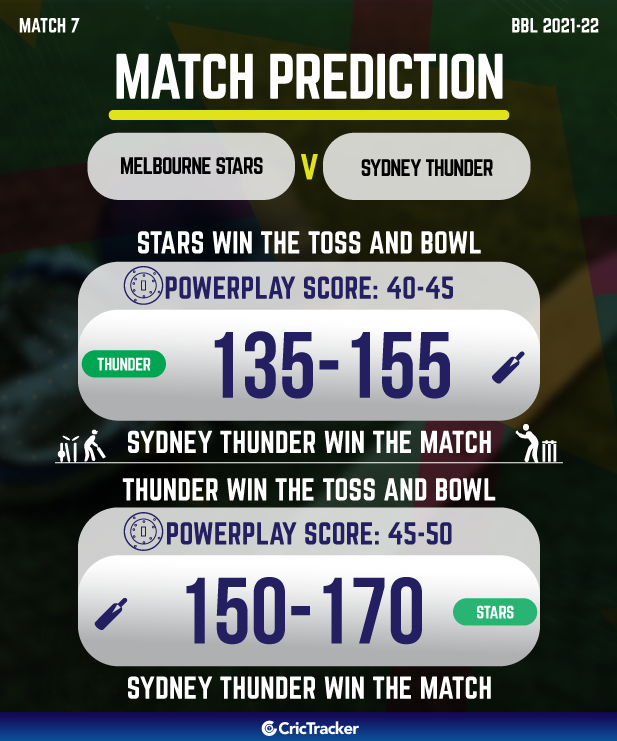