Blues vs Reds, Match 6 Prediction – Who will win today’s match between SLC Blues vs SLC Reds?

The Blues have won both of their matches in the competition so far.

Table-toppers SLC Blues will want to continue their good form against SLC Reds in a group stage match of the 2022 SLC Invitational T20 League to be played at the R. Premadasa Stadium, Colombo on August 13 (Saturday). To note, the Blues have won both their matches in the competition, while the Reds lost their previous fixture after winning one match earlier on.

SLC Blues won their previous fixture against Greys by a margin of four wickets with nine balls to spare. On the other hand, SLC Reds had to suffer a defeat at the hands of Greens. Both teams have a strong batting line-up and it will be an equal contest between two strong-looking teams.

The wicket at R. Premadasa Stadium is assisting the slow bowlers and it was quite evident in the previous matches of the tournament. However, the ground staff might have prepared a fresh wicket for the encounter as there was a three-day gap between the matches. The skipper winning the toss might prefer to have a bowl first.

SLC Blues skipper Charith Asalanka played a crucial knock of 28 runs in the previous match and helped his side to gain two vital points in the points table. The left-handed batter also stroked four fours and will want to continue his good form with the bat in the upcoming match as well.

Spinner Praveen Jayawickrama was adjudged player of the match for his excellent bowling performance during his last outing. The left-arm spinner grabbed a total of three wickets in his four-over quota as he put the brakes on the opposition’s scoring rate. He will want to repeat his antics in the upcoming match as well. 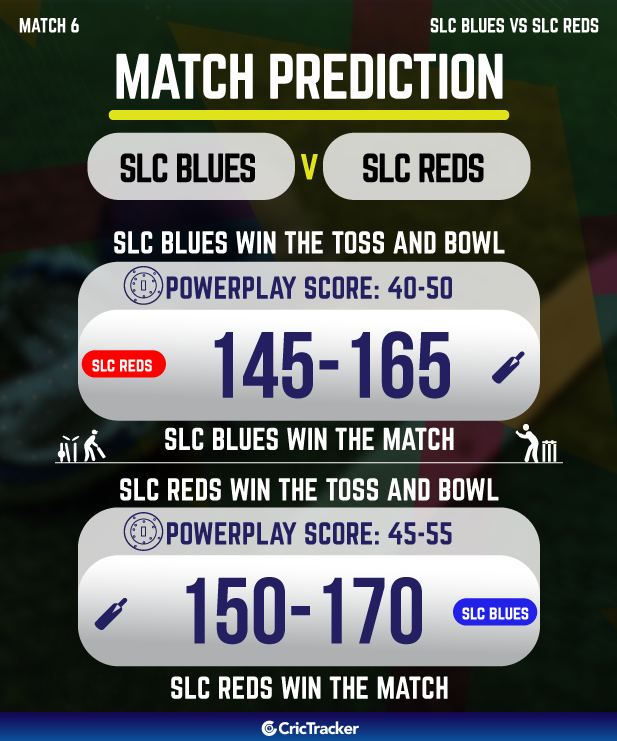