Both teams are precariously placed at the bottom half of the points table.

Rangpur Riders, the defending champions, have had a pretty lacklustre campaign thus far in this edition’s Bangladesh Premier League (BPL). In six matches thus far, Mashrafe Mortaza and Co have only won a couple and are languishing at the fifth position of the points table. They are next scheduled to lock horns with the David Warner-captained Sylhet Sixers at the Sylhet International Cricket Stadium.

Two days ago, the Riders lost their contest against the Sixers by 25 runs and would be keen to avenge the defeat. The Sixers, on the other hand, lost their fourth match of the tournament against table-toppers Dhaka Dynamites by six wickets. Both Riders and Sixers need some victories to progress to the next round and they couldn’t afford any sort of complacent effort that could lead to their downfall.

The track turned out to be fairly good for batting in the last afternoon match between Sylhet and Dhaka Dynamites. Another such strip can be expected even in the first of tomorrow’s doubleheader at the SICS. Both teams have a strong batting lineup and it won’t spring a surprise if the teams opt to field first after winning the toss. Bowlers may have to work hard for getting wickets.

Al Amin Hossain has been a tad rusty and Mehedi Hasan Rana may get a chance in place of him. Liton and Sabbir would open the batting with the likes of Afif Hossain and David Warner in the middle order. Jaker Ali and Alok Kapali need to step up as well. Rana is likely to partner Mohammad Irfan and Taskin Ahmed in the fast bowling department. Sandeep Lamichhane and Hossain are the spin bowlers.

Chris Gayle and Mehedi Maruf are the opening batsmen. AB de Villiers may play the match. The onus would be on Rilee Rossouw to shepherd the middle order. Mohammad Mithun and Benny Howell would also have to shoulder some responsibility. The team may sideline Nahidul Islam and bring in Abul Hasan. Shafiul Islam, Farhad Reza and Mashrafe Mortaza are the fast bowlers. Sohag Gazi is the spinner.

The prediction is for Rangpur Riders to come out trumps. 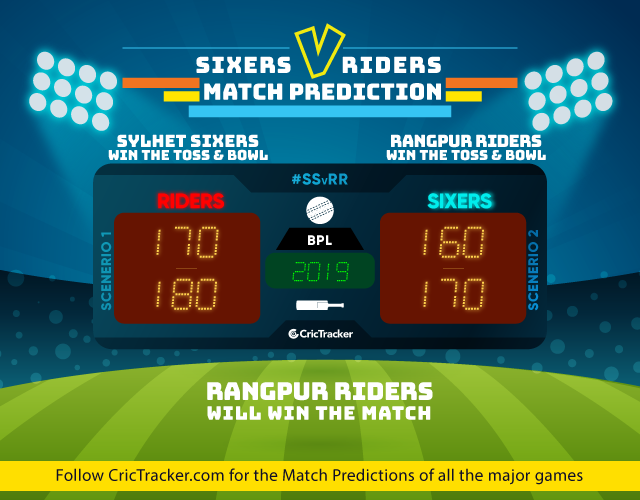