A cracker of an encounter is in store at the Sher-E-Bangla National Stadium.

The match between Dhaka Dynamites and the Chittagong Vikings is one of the most awaited ones in the ongoing Bangladesh Premier League (BPL). Both teams have lost only one match and made their opponents work hard. Now, Chittagong, led by Mushfiqur Rahim, have the golden opportunity of equalling Dhaka on points and maybe dethrone them from the top going ahead in the tournament.

They are on a three-match winning streak and managed to rack up the first 200 plus score in this BPL at the SICS in Sylhet against Khulna Titans. The Dynamites, on the other hand, managed to find their feet against Sylhet Sixers following their defeat against Rajshahi Kings in Sylhet. Moreover, a Net Run Rate of +1.942 suggests that they have been able to crush their opponents with disdain.

The 24th match of the Bangladesh Premier League (BPL) 2019 will be played between Dhaka Dynamites and Chittagong Vikings at the Sher-e-Bangla National Stadium.

In the first few matches at the venue, the pitch turned out to be a slow and low one. But as the tournament progressed, some high-scoring affairs also unfolded in Dhaka. Being a night-match, bowlers are likely to come under the cosh as dew is expected to play a major part.

Aliss Islam injured himself in the last match and Shuvagata Hom may replace him. Hom mostly bats in the lower-middle order and he bowls handy off-spin as well.

Robbie Frylinck was not fit during Chittagong Vikings’ previous match.

It’s tough to predict the exact teams as they have made frequent changes to their lineup.

Khaled Ahmed currently has eight wickets from five matches at an economy of 7.31. Moreover, he picked up at least one wicket in all the contests, something that shows his reliability as a bowler. His best figures of 3/34 came against Comilla Victorians in Dhaka.

Shakib Al Hasan and Sunil Narine can be considered for the captain and vice captain’s role bearing in mind their all-round abilities. The experienced Mushfiqur Rahim won’t be a bad choice either as the vice-captain. 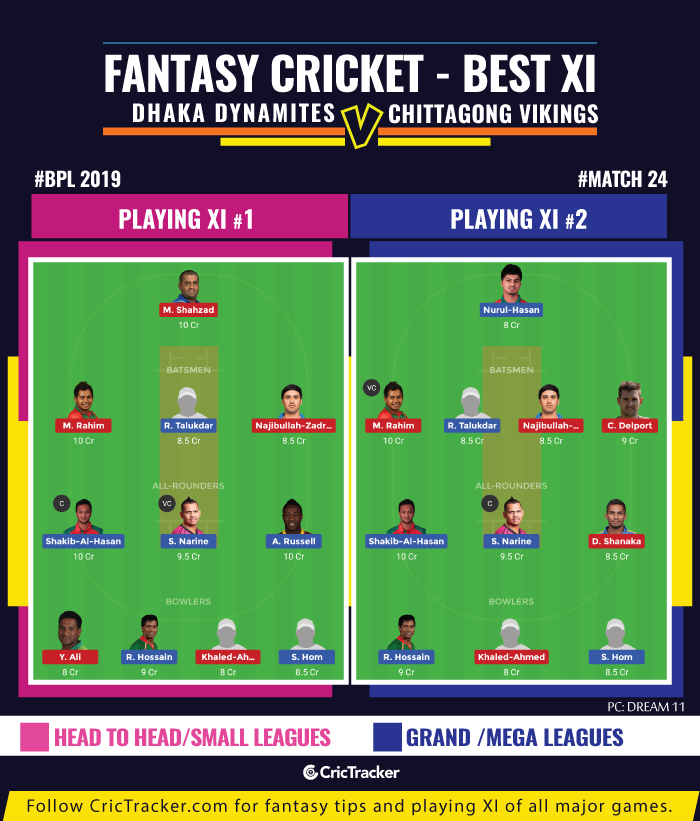 BPL has witnessed some dramatic changing to their overseas options. The in-form Robbie Frylinck missed the last game due to fitness issues.  Hence, he was not considered in our suggested XIs.

Dhaka Dynamites, playing on their home ground are likely to win the match and stay on top of the points table.