The Vikings have won five out of the six games they played in the season thus far.

Two matches will be played on Wednesday in the BPL at Dhaka before the Chattogram phase of the league begins. In the first of those games, the Chittagong Vikings will take on the Rajshahi Kings. The Vikings are one of the better teams in the tournament at the moment. In six games, they won five matches and stand second on the points table.

However, it will not be an easy task for them to overhaul the Dhaka Dynamites and claim the top spot. The focus for the Vikings will be to seal the semifinal spot in the first place. At the same time, the Rajshahi Kings have got a different set of challenges. With four wins in seven games, they are at the fifth place on the points table currently. They must win this game at all costs in order to forge into the top-four in the points table.

The 27th match of the Bangladesh Premier League (BPL) 2019 will be played between Chittagong Vikings and Rajshahi Kings at the Sher-e-Bangla National Stadium in Mirpur, Dhaka.

The Dhaka pitch typically suits the batsmen while playing under the sun. The ball tends to come on to the bat nicely and is good for the stroke makers. However, there are quite a few instances of pitch slowing down in the second half of the game. The side that wins the toss should look to bat first.

Note: All-rounder Prasanna might replace Jonker as the South African batsman at times is getting wasted down the order.

Isuru Udana of Rajshahi Kings is part of the unofficial One-Day series between Sri Lanka A and Ireland A. Thus, he will not be available for the upcoming games.

Cameron Delport is the power pick for the match. The left-hander scored 76 runs with the bat in the first four games of the tournament. Moreover, he also contributed significantly with the ball in the last two matches. He scored 43 runs and picked up five wickets (2/25 and 3/25) in total in these two encounters.

Any two players among Robbie Frylinck, Laurie Evans and Mehidy Hasan Miraz as captain and vice-captain should be perfect for your eleven. Otherwise, Mushfiqur Rahim and Cameron Delport are alternatives. All these players have fared decently well in the tournament and it should be more of a personal choice for you to pick any two among them. 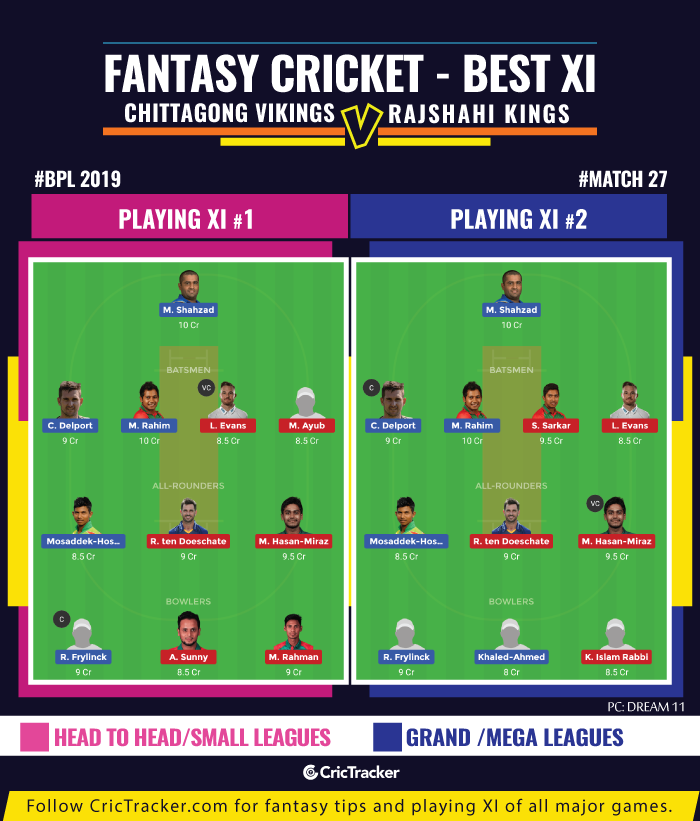 In the bowler’s category, Arafat Sunny and Mustafizur have been picked due to their experience. Do watch out for Khaled Ahmed and Kamrul Islam Rabbi who can excel if there is any help from the pitch.

The Chittagong Vikings are likely to register their sixth win in the tournament.