Both the sides are coming into this game after hard-fought wins in their previous encounter.

Chittagong Vikings and Rajshahi Kings will lock horns on Wednesday with two different motives. Whilst the Vikings will be looking to register their 6th win and take the top spot, Kings will be keen to stay relevant in the top four race which is getting very exciting with every passing day.

Both the sides are coming into this game after hard-fought wins in their previous encounter. Whilst the Vikings thumped hot-favourites Dhaka Dynamites in their game, Rajshahi managed to comfortably sail past Comilla Victorians and stayed on level terms with Rangpur and Comilla on the points table with four wins.

Rajshahi and Chittagong have done a pretty amazing job in their hunt for a maiden BPL title but the journey will demand a lot more in the coming weeks. After ticking off a major box in their previous encounters, they now have another big obstacle to clear which won’t be easy either.

The last three afternoon games have seen team scores in excess of 170 on a regular basis, which should be a pleasing sight for the batsmen. The temperatures are expected to remain on the higher side and should be a tough outing for the bowling units.

The attacking duo of Mohammad Shahzad and Cameron Delport will have a great pitch to bat on and should try to make the most of the new ball. The presence of Mushfiqur Rahim, Dasun Shanaka, Mosaddek Hossain and the in-form Robbie Frylinck is always a plus in the middle order. Teenage sensation Nayeen Hasan will have a huge role with the cherry alongside Sunzamul Islam, Abu Jayed and Khaled Ahmed. Frylinck too will be keen to continue his purple patch with the ball.

Soumya Sarkar might come into the XI for this game and that would keep Nafees out. He will open with Laurie Evans in that case, with Marshall Ayyb, Ryan ten Doeschate and Zakir Hasan following them. Mustafizur Rahman has not been in the greatest wicket-taking form but will continue to be an important member. Kamrul Islam and Mehidy Hasan will create a lot of problem with their spin with assistance coming from Arafat Sunny and Christiaan Jonker.

The prediction is for Chittagong Vikings to take the top spot on the table after a hard-fought win. 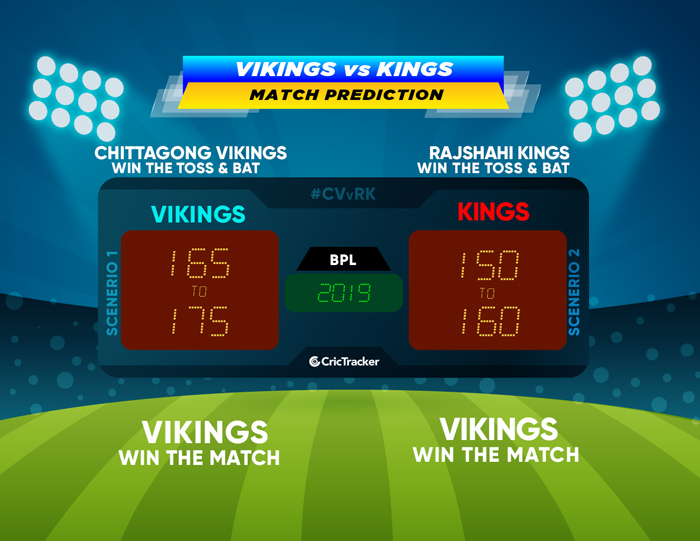