Mushfiqur Rahim has led the side superbly so far.

The Chittagong Vikings, after having ascended to the top of the points table, will take on the Rangpur Riders in a critical encounter. Playing in their home ground, the Vikings will have a slight upper hand as the players know the conditions well. The team has won six out of seven games thus far and will look to strengthen the hold over the first place.

Their opponents, the Rangpur Riders, are currently placed fourth on the points table. However, their position is still not secure with many other teams trying hard to displace them. Therefore, a lot is at stake for the Riders who are coming off a great win against the Khulna Titans in the last match.

The pitch, if it behaves like it usually does, should have a lot of runs on offer. The stadium in Chittagong has got a great outfield and the ball races away to the boundary once it is in the gap. There could also be a slight bit of assistance for the spinners. The weather is predicted to cool down in the evening and the pitch might get a tad quicker in the second innings due to high levels of humidity.

The Chittagong Vikings’ top-order suffered a rare failure in the last game. But, the management is expected to keep the winning combination going. Mushfiqur Rahim was a brilliant act in the last game with the bat and he will hope to repeat the heroics yet again. Mosaddek Hossain complemented him well. Robbie Frylinck, Khaled Ahmed form an important part of the bowling attack.

The top-four batsmen of the Rangpur Riders are quite a force. With big hitters like Chris Gayle, Alex Hales, Rilee Rossouw and AB de Villers, the lineup looks deadly. On their day, they are capable of blowing away any opposition quite easily. But, have all the four overseas players stocked right up there has weakened the bowling slightly. Skipper Mashrafe Mortaza and Farhad Reza will have huge roles to play.

This match is predicted to be a closely fought contest. The Rangpur Riders are expected to break the five-match winning streak of the Vikings. 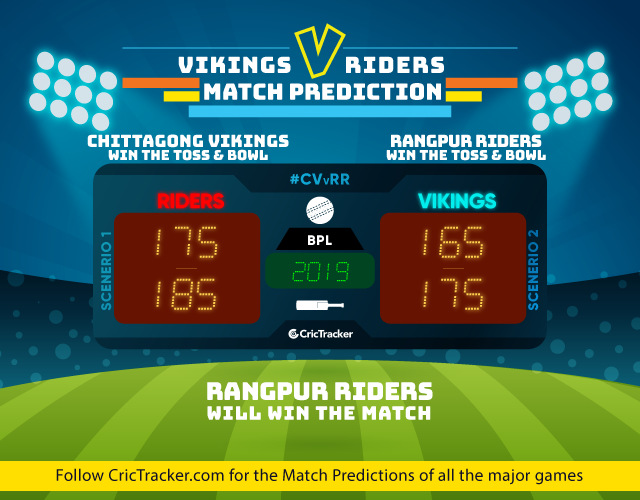