Both teams lost their last three matches and are in dire need of a victory to get their campaign back on track.

Dhaka Dynamites and Chittagong Vikings were on a role in the early part of the round-robin stage of this edition’s Bangladesh Premier League (BPL). However, both have somehow managed to enter into a slump. Even as the Dynamites lost four out of their last five matches, the Mushfiqur Rahim-captained Vikings are yet to win at the Zahur Ahmed Chowdhury Stadium in Chattogram, their home ground.

They would next be facing the Dynamites at the same venue in the first of tomorrow’s doubleheader and would be keen to finish their Chattogram leg of the tournament on a happy note. The Dynamites, on the other hand, are winless for the last three matches. Shakib Al Hasan’s men are languishing midway in the table. But, they can take heart from the fact that they have played the least number of games.

To the relief of the players and the fans, chances of rain are bleak and a full match could be expected. The temperatures would also hover around the 24 degrees mark. The pitch behaved a tad indifferently on Tuesday, yet high-scoring affairs can’t be dismissed out of the sight by any means. Batting second would be the safer option if the heavens open up even tomorrow.

The Vikings may want to give Shadman Islam another chance at the top of the order. Their batting would want to come good after a lacklustre show against Comilla Victorians. With Nayeem Hasan coming at number nine, depth in batting won’t be an issue for the hosts. Their bowlers, especially the seamers, are in decent form and the team would be looking up to them for another good show.

Like Chittagong, Dhaka also haven’t won in Chattogram. Shahadat Hossain and youngster Qazi Onik got chances in the last matches and the management may stick with the pacers. The onus will be on the likes of Shakib, Andre Russell and Kieron Pollard to arrest the team’s slide. Zazai and Narine need to give the Dynamites a brisk start. Rony Talukdar, Rubel and Hasan will want to perform decently as well.

The prediction is for Dhaka Dynamites to win the match. 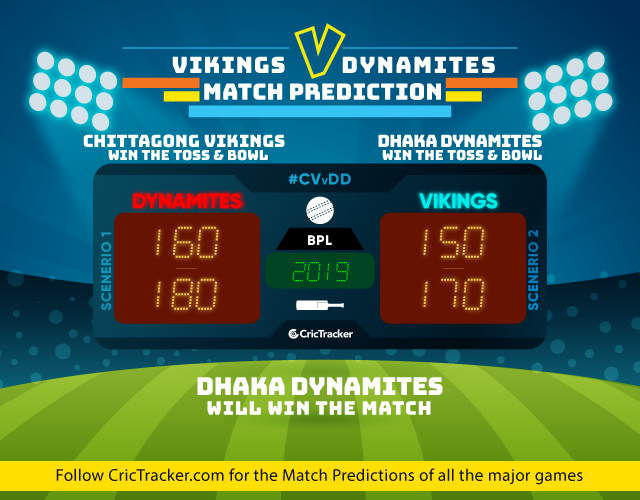