The Dhaka Dynamites might make it two wins in two matches pushing Khulna Titans to their second defeat in two games.

The runners-up of the previous edition, Dhaka Dynamites started the season with a big win as the star players on their side stepped up in the first match. The opening pair of Hazratullah Zazai and Sunil Narine maintained the Dynamites scoring at 11+ an over during their century partnership. Their stand played a key role in helping the team finish on 189 despite slowing down in the second half. They will be up against the Khulna Titans in the second match.

The Mahmudullah-led Titans lost to Rangpur Riders in the first game which was a thriller. During the chase of 170, the Khulna team got off to a flyer before the Riders bounced back in the middle-overs and clinched a close win. The Titans will be hoping to put on an improved show in the second match. Both the teams have got a break after their opening match and will have enough time to analyze their performances and the tracks to be used.

The 5th match of the Bangladesh Premier League (BPL) 2019 will be played between Dhaka Dynamites and Khulna Titans at the Shere Bangla National Stadium in Mirpur, Dhaka.

The track on Sunday played better compared to the pitch on the first day of the tournament but was far from matching the usual track seen for the T20s in Dhaka. However, low scores are recorded in the afternoon game compared to the matches played under lights. A game with scores of at least 160 can be expected which will be played after the one-day gap.

Khulna Titans’ Lasith Malinga is part of Sri Lanka’s squad in the tour of New Zealand while Yasir Shah is part of Pakistan’s tour of South Africa.

The Dhaka Dynamites’ all-rounders will be game changers for the franchise. The likes of Shakib Al Hasan, Andre Russell and Sunil Narine have the ability to change the course of the game with both bat and ball. Kieron Pollard will also be a handy player for the Dynamites despite his recent poor form.

Among the all-rounders, Shakib Al Hasan and Sunil Narine will be the first preferred multiplier options. Andre Russell and Zazai can be considered for vice-captain role. Paul Stirling will be an ideal alternative for any of the multipliers. 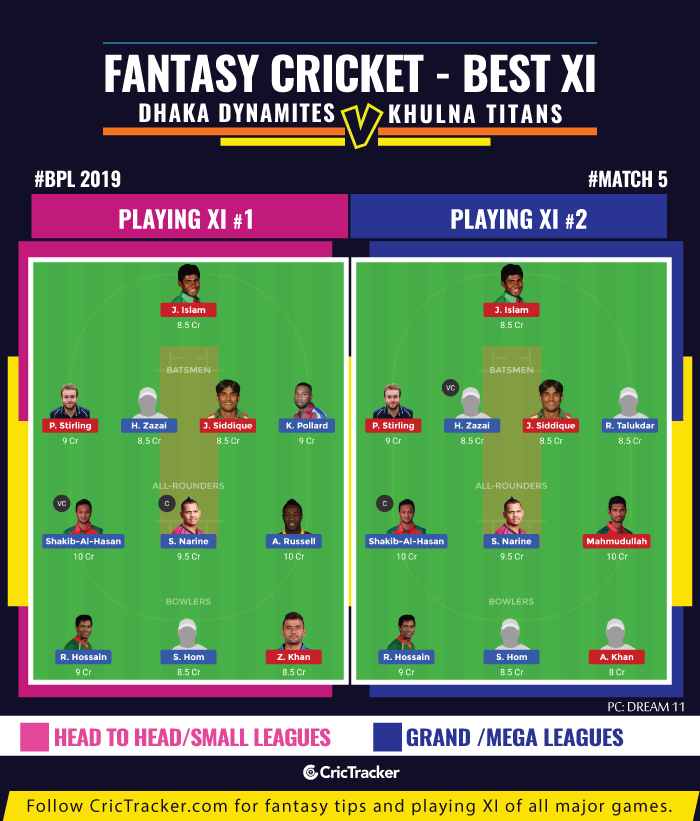 The all-rounders’ category is filled with Shakib Al Hasan, Andre Russell, Mahmudullah and Sunil Narine. Since a maximum of three can be picked, the Dhaka trio could be the first choice. A toss-up can be made between Mahmudullah and Russell if the Titans captain is preferred.

The Dhaka Dynamites might make it two wins in two matches pushing Khulna Titans to their second defeat in two games.