Last time, the Riders beat the Dynamites by eight wickets, but this time around, their task won’t be easy.

The Dhaka Dynamites arrested their slump and won two must-win encounters against Rajshahi Kings and Chittagong Vikings respectively, and now are scheduled to play the Qualifier 2 against Rangpur Riders at the renowned Sher-E-Bangla National Stadium in Dhaka. The Dynamites, captained by Shakib Al Hasan, are the three-time champions and are pretty accustomed to winning games in crunch moments.

The Riders, on the other hand, are the defending champions but are depleted as AB de Villiers and Alex Hales aren’t part of the championship. After winning six matches in a row, the team, led by Mashrafe Mortaza, lost against Comilla Victorians and the X-factor in the batting order was seen missing big time. Last time, they beat the Dynamites by eight wickets, but this time around, their task won’t be easy.

The pitch at night would suit the batsmen and bowlers would have their say in the first innings. Therefore, fielding first has to be the way forward for both teams, though the Riders’ captain Mortaza said earlier that he didn’t want to put pressure on the batting and hence elected to bat first against the Victorians. Their decision eventually backfired.

Upul Tharanga and Sunil Narine form the left-handed opening duo with Rony Talukdar to bat at number three. Skipper Shakib failed in the last match and he would want to make amends. Being experienced campaigners, the focus will also be on Kieron Pollard and Andre Russell. The bowling unit did well against the Vikings and would be keen to replicate their show in the next game as well.

Chris Gayle and Mehedi Maruf are the opening batsmen with Mohammad Mithun at number three. The onus would be on the likes of Rilee Russouw and Ravi Bopara to shepherd the middle-order. The onus would be on Benny Howell, who replaced De Villiers, to put up an all-round show. The bowling lineup failed miserably against the Victorians and it would need to pull up its socks big time.

The prediction is for Dhaka Dynamites to storm into the finals. 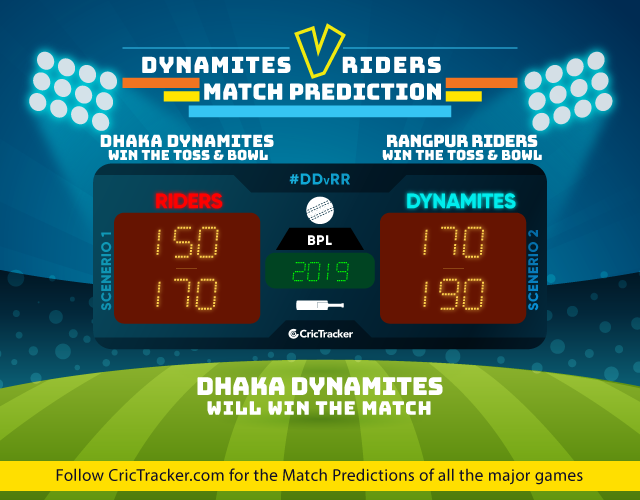