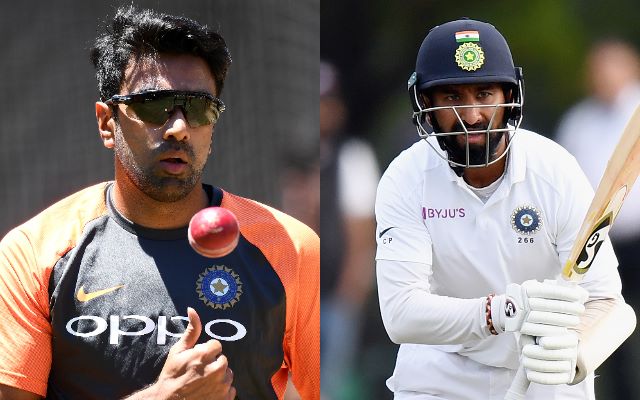 The jumbo Indian squad is in Australia currently, preparing for their mega-series planned ahead. The ODI series kicked off yesterday in Sydney, and India had to see the face of loss by 66 runs. However, many more clashes are on the table in times coming up, and players are going full throttle with their preparations. In the meanwhile, Test squad mains Ravi Ashwin and Cheteshwar Pujara seem to have some fun time together.

Pujara came up with a video where he is doing his weight training, and ace spinner, Ashwin, was seen imitating him. While Pujara worked out with his dumbles, Ashwin followed it like a student. The Saurashtra batsman posted the funny video with a caption, “The apprentice following the master.” Pujara is deemed as one of the best Indian batsmen in the longest format of the game as of today.

Cheteshwar Pujara was best, the last time India played Australia on their soil

When India toured Australia last time, Pujara turned out to be the highest run-getter in Test format. India won the Test series on hosts’ soil while the class batsman bagged 521 runs in his account in four matches at an average of more than 70. Virat Kohli is set to miss three Tests with the team owing to his paternal leave. Talking about Ashwin, he is considered as one of the best spinners in red-ball cricket.

Last time, he got to play only one Test against Kangaroos but contributed in a major way towards India’s victory. He will have to shine to the best of his abilities against the full-fledged Australian team in the Test matches beginning on December 17. The first day-night Test will be played in Adelaide, where Kohli would lead the team and would set foot for India thereafter.

The last time when India played Australia on their soil, their batting mainstays in form of David Warner and Steve Smith were missing from their arsenal. Both of them are back and seem to be in dangerous form. In the first ODI against India, David Warner grabbed 69 runs, and Smith caused the destruction with his brilliant ton.