The defending champions will be playing after a break of seven days.

Trinbago Knight Riders (TKR) will continue their campaign after a seven-day rest as they square off against the Barbados Tridents in the 18th match in the ongoing Caribbean Premier League (CPL). The hosts lost their first home game to the Patriots and would be hoping to make amends by putting up an improved show against the defending champions. However, it will not be easy for them as the opposition have some champion T20 players who can turn the game on their own.

Dwayne Bravo-led Knights, on the other hand, will be fresh and rejuvenated. But they should be wary of being rusty as the hosts will be raring to get back to winning ways. They are currently third in the points table and a win will take them to the top of the charts. The Knight Riders haven’t been consistent and clinical enough this season and the team management would want them to be at their best as the tournament is set to go deep.

If the norm of the competition is concerned, this game is set to be a high-scoring one. They will play on a different pitch it seems and a fresh wicket will mean a strip full of runs. Chasing will be a preferred option for both the teams and a humdinger is in store for the spectators for sure.

Jason Holder promoted himself to number three to surprise one and all as the move worked for him. But it seems that the rhythm was disturbed for the others as Steve Smith looked out of sorts at six. They will also hope for Mohammad Irfan to replicate a similar kind of spell and make it tough for the batsmen to score runs. The openers will have to give them a good start though. No changes are expected in the team from the previous game and Hashim Amla will continue to stay in the sidelines.

The star-studded line-up has struggled with their bowling a bit this year. The likes of Sunil Narine and Dwayne Bravo have not been able to put their best foot forward. Ali Khan was extremely expensive in the last game and he might make way for Shannon Gabriel or Kevon Cooper. The battling line-up picks itself and if even one of them clicks, the game will be theirs.

The prediction is for the Tridents to make amends for the loss and put up a good performance in this game to win against the TKR. 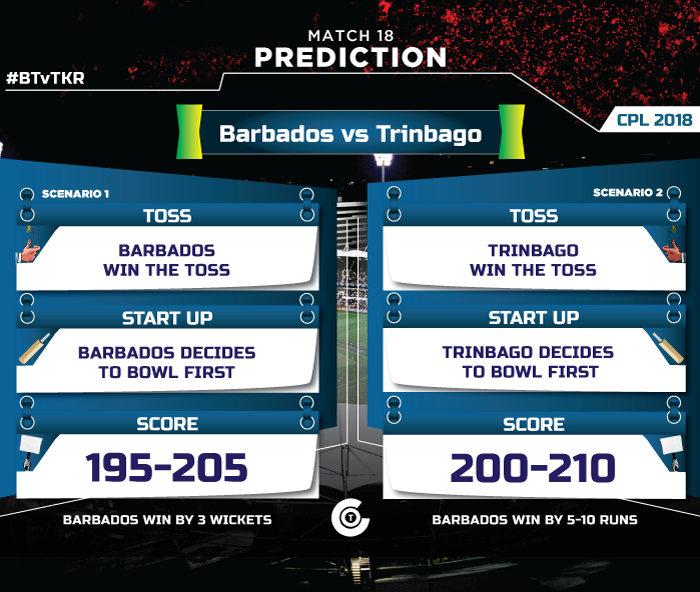