The Warriors have lost their last four matches against the Knight Riders.

The Trinbago Knight Riders are in the middle of a purple patch as they have won their last four matches in this year’s Caribbean Premier League (CPL). Their last defeat came against current table-toppers St Kitts and Nevis Patriots, captained by Chris Gayle, on August 11. That was also their last match in Trinidad, where they have flunked in two out of three matches.

However, Dwayne Bravo and Co avenged their defeat in the last match with a 42-run victory. The Warriors, on the contrary, are on the third position and are expected to be in good stead following their resounding victory against Barbados Tridents. In the meantime, both teams have the opportunity to top the points table provided they manage to outclass their opponents.

The track at Queens Sports Oval, Port of Spain have been decent for batting thus far in the three matches. On all three previous occasions, scores over 190 have been registered. Moreover, the highest run chase in CPL’s history by Andre Russell-led Jamaica Tallawahs took place at the very venue. Teams are likely to bowl first after winning the toss and chase on the strip.

The Knight Riders may field Hamza Tariq if Chris Lynn doesn’t remain in the squad. In that scenario, Sunil Narine and Brendon McCullum will be the openers. Colin Munro will come at number three itself. The Bravo Brothers- Darren and Dwayne have to come to the party. In the bowling department, the onus will be Ali Khan with the new ball then the spin trio of Fawad Ahmed and Narine.

The Warriors won’t want to tinker with their winning combination. Chadwick Walton and Luke Ronchi found their form in the last match. Shimron Hetmyer and Cameron Delport are required to take responsibility of the middle order. Sohail Tanvir will be needed to put a lid on the scoring rate. Imran Tahir, Veerasammy Permaul and Chris Green are the tweakers.

The prediction is for Trinbago Knight Riders to win their fifth match in succession. 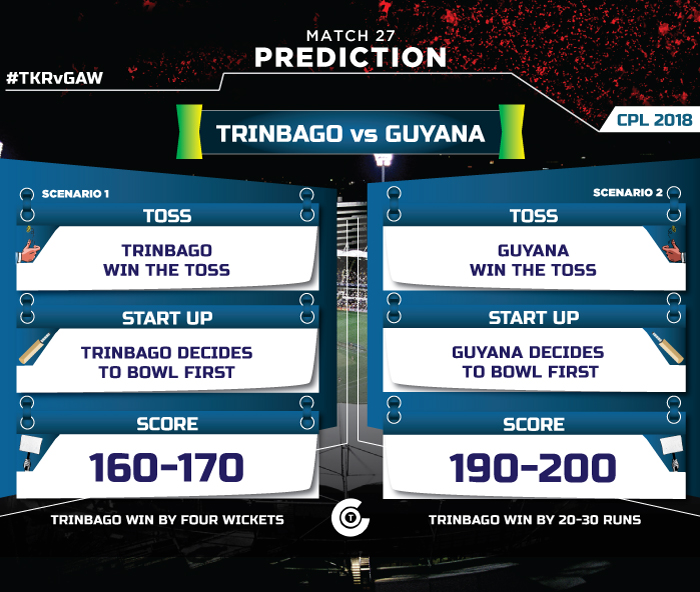