Last year, the Stars lost both their contests against the Warriors.

Both Guyana Amazon Warriors and St Lucia Stars have had contrasting beginnings to their campaigns in this year’s Caribbean Premier League (CPL). While the Warriors brushed aside St Kitts and Nevis Patriots in their opening match, Kieron Pollard’s Stars slumped to a 100-run drubbing against Trinbago Knight Riders. The teams will now cross swords at Providence Stadium in the first of tomorrow’s doubleheader.

Last year, the Stars lost both their contests against the Warriors. Most importantly, they would be desperate to cease their ten-match losing streak. The visiting team would also want to resurrect their Net Run Rate (-5.00), which went for a toss against Dwayne Bravo and Co. On the other hand, Shoaib Malik’s men would aim for another win and keep their impressive form going.

The track assisted both the spinners and the fast-bowlers in the erstwhile encounter in Guyana. Also, the likes of Chris Gayle and Shimron Hetmyer showed that the pitch didn’t have many demons to be petrified of and run-making is possible if the batters are ready to put their heads down. Meanwhile, teams may look to bowl first, especially with the batting strength they possess.

The Warriors won’t want to tinker with their winning combination. The openers- Ronchi and Walton- faltered in the last match and need to fire. Shimron Hetmyer and Malik remain to be the stalwarts in the middle-order. Chris Green’s all-round contributions helped their cause of winning against the Patriots and a similar show is needed from him. The bowling lineup also looks a formidable one.

After one defeat, the team may persist with the same eleven and give them a chance for redemption. Warner, Fletcher and Simmons’ role at the top order will be vital. Pollard and Sammy, being the experienced players, also need to step up. The bowlers did reasonably well, barring Mohammad Sami, who was taken for quite a few runs. He would definitely want to make amends.

The prediction is for Guyana Amazon Warriors to win. 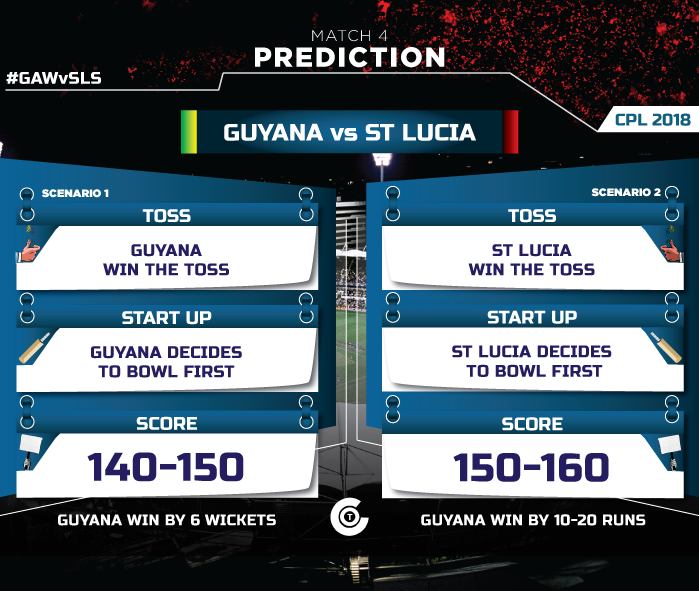