The teams met in the CPL final only once back in 2014 where the Tridents came out trumps by 8 runs (D/L Method).

After all the excitement in the league stage and playoffs, it all boils down to the final of the 2019 CPL between Guyana Amazon Warriors and Barbados Tridents at the Brian Lara Stadium in Tarouba. The Warriors have experience of playing the final four times, though they are yet to get their hands on the trophy. However, after winning 11 games on the trot, it won’t be wrong to call them favourites.

The Tridents’ campaign has been completely different to that of their opponent. The Jason Holder-led unit huffed and puffed, managing to finish second in the points table. In the Qualifier 1, they lost at the hands of the Warriors, but then stunned the Trinbago Knight Riders in the Qualifier 2. The Warriors and Tridents have played the CPL final way back in 2014 where the latter came out trumps.

Since it’s a 5 PM start, dew may not play a big part and the track will give more assistance to the spinners. Both sides have quality spinners in their ranks and may prefer, batting first. Though there are no chances of rain during game-time, the heavens will open up, especially from 12 PM to 3 PM onwards. It won’t be a surprise, if the match gets delayed. The playing conditions will be soggy.

The Warriors won’t want to change the lineup that defeated the Tridents at the Providence. Brandon King, who tormented Barbados last time with a 132*, would be looking for another strong show. He is also set to end as the tournament’s leading-run scorer. Hemraj, King’s opening partner, has been excellent. Malik has 313 runs at 78.25 with the lowest dot-ball per cent and his role will be crucial.

Shimron Hetmyer’s form is a bit of a concern though. Pooran has got going as well. In the bowling department, Imran Tahir and Chris Green with 15 and 13 wickets respectively will hold the key. Moreover, Romario Shepherd and Keemo Paul have made inroads. Odean Smith hasn’t backfired either. All in all, the Warriors look a formidable and most crucially, a settled unit ahead of the game.

The Tridents may not have the services of JP Duminy. The southpaw pulled a hamstring while batting in the last match versus TKR and had to retire hurt. In his absence, either one of Justin Greaves and Leniko Boucher are likely to be included. If Duminy doesn’t play, then opening batter Johnson Charles’ role at the top becomes that much more vital as he is their leading run-getter this season.

Raymon Riefer and Ashley Nurse can be promoted higher bearing in mind their good form with the bat. Nurse returned to bowling after six matches and he did exceptionally. He will be one of Jason Holder’s go to man in the final. Reifer also held his nerve with the ball in hand. The skipper is in good form, having picked up 14 wickets. It goes without saying that a lot would depend on Walsh Jr.

The prediction is for Guyana Amazon Warriors to win the match and the CPL for the first time in seven seasons. 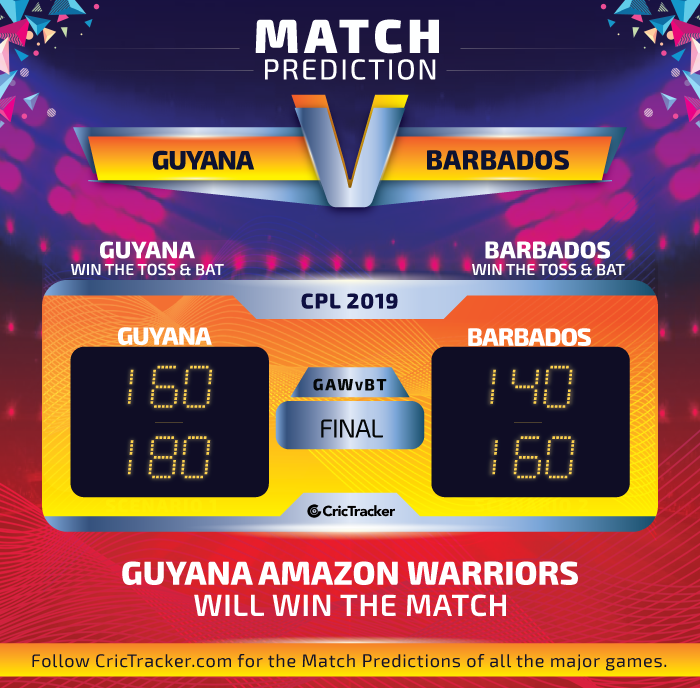