The Knight Riders have 4-1 win-loss record at the Brian Lara Stadium. Can they qualify for their third consecutive final?

It’s time to decide who will join the Guyana Amazon Warriors for the final of the 2019 CPL. Trinbago Knight Riders and the Barbados Tridents are set to fight it out in the Qualifier 2 at the Brian Lara Stadium. It can be said TKR got out of jail in the Eliminator versus St Kitts and Nevis Patriots. The Tridents defeated them both times in the league stage and the Knights would be wary of them.

TKR has a great record at the venue in the CPL, having won four out of their five matches. On the other hand, the Tridents will be playing at the very ground for the first time. The Jason Holder-led unit went down to the Warriors in the Qualifier 1, but their recent record versus the Knights will give them a lot of confidence. TKR has more experience of playing in the playoffs than the Tridents.

In the last two editions of the CPL, four out of the six games at the venue were won by the team, batting second. And even the Knights have won three games, chasing at the venue. But in this season, TKR has chased down targets only once, same is the case for the Tridents. Hence, they may wish to play safe, batting first. There are chances of rain before the game, not during game-time.

Sunil Narine returned for TKR in their previous and that worked wonders for TKR. Though he bowled with an injured finger, he was on top of his game. James Neesham is likely to warm the bench even in the next game. Lendl Simmons, the second-highest run-scorer this season, remains a key and needs to be on top of his game. Colin Munro and Darren Bravo are yet to come into their own.

Denesh Ramdin has shown that he doesn’t lose his calm even when put under pressure. Skipper Pollard has been hitting the ball well enough. In the bowling department, Chris Jordan and Ali Khan are in reasonable. Pierre has been economical and now needs to get amongst the wickets. Pollard’s slow medium pacers have also come in handy. Akeal Hosein should retain his place in the eleven.

The Tridents have depended heavily on their bowling. Hayden Walsh Jr is in the form of his life and has generally picked up at least a couple of wickets in every game he has played thus far in the tournament. Shakib Al Hasan was taken for plenty in the previous game, but he isn’t someone to remain bogged down for long. Shai Hope will wish to make amends after failing in his first game.

Holder, Raymon Reifer and Harry Gurney haven’t been predictable and have been hard to get away. Their batting has blown hot and cold, to say the least. Johnson Charles and JP Duminy are their top run-getters, but even they have strained to find their feet of late. Alex Hales has threatened at times, however, hasn’t scored something substantial. Shakib has shown intent though after joining late. 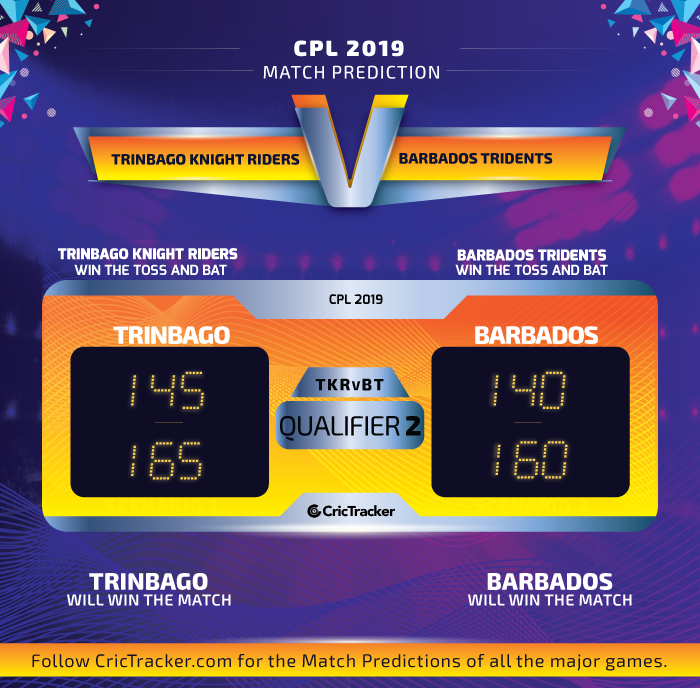