After a ludicrous loss, the Tridents will be looking to make a comeback at any cost to keep themselves alive in the tournament.

The Guyana Amazon Warriors will take on the Barbados Tridents in the 22nd match of CPL 2020 on 1st September. The Caribbean gala is moving into its third phase after 10 days of action in Port of Spain and the remaining matches will be played at the Brian Lara Cricket Stadium in Trinidad.

This meeting is going to be their first in the tournament. The CPL points tally is wide open and the coming encounters are going to be thrilling in this sense. The Warriors, with 4 losses and 3 wins in their 7 matches thus far, are located at the third position with 6 points whereas the Tridents, who have been able to win just 2 of their 7 encounters, stand at the fifth position out of six participants.

Chris Green and his men are coming into this match after scripting a magnificent victory of the bottom-placed St Kitts and Nevis Patriots courtesy a threatening blinder by Nicholas Pooran. He toyed with the Patriots’ unit as he pummeled 10 sixes in his century off just 45 balls. Green used as many as 7 bowlers as the Patriots asked them to chase 151. But the encounter was all about one man who stole the show and singlehandedly won the match for his team.

Barbados Tridents, on the other hand, have lost two encounters in a row before this game. They are coming to face the Warriors after the strangest of defeats in any of the tournaments, let alone the CPL. As every bowler chipped in in their last game against the St Lucia Zouks, they dismissed them for a ridiculously low score of 92. Only to ridicule themselves more as the Zouks pulled off a heist to hand them the most bizarre loss by 3 runs.

None, absolutely none of the batsmen apart from Johnson Charles even looked like they wanted to chase the target. The Zouks’ bowling line up proved to be too good for Jason Holder’s men as they tumbled for 87 runs. After a ludicrous loss, the Tridents will be looking to make a comeback at any cost to keep themselves alive in the tournament.

In all the matches of the first leg at Trinidad, the pitch assisted the spinners quite much, however, any of the batsmen who applied themselves were able to reap the benefits. Today’s game will be played on a fresh pitch and the track is expected to be hard. Therefore, both fast bowlers and spinners are expected to come into play. Thunderstorms are expected but we should have a full game.

The entire tournament has passed without any substantial contribution at the top for the Warriors. They paired Kevin Sinclair aside Brandon King after Chandrapaul Hemraj continuously disappointed, however, Sinclair did nothing different. Shimron Hetmyer has lost touch after success in the first few games.

Ross Taylor stitched a magnificent partnership that was all about the centurion Nicholas Pooran, however, Taylor did well to ensure that he held one end. Keemo Paul has made valuable contributions and he is expected to play in the lower middle-order along with skipper Chris Green.

Romario Shepherd has been inconsistent, however, he bowled extremely well in the last game. Both Ashmead Nedd and Naveen-ul-Haq have had decent runs, though they surprisingly went wicket-less in the last game.

Johnson Charles was not finding his rhythm in the entire tournament and the only time he did, his entire team lost it. He scored 39 out of the total 87 the Tridents managed against Zouks. Shai Hope’s wicket opened the floodgates as none of the following batsmen were able to control things.

Corey Anderson’s reputation of a big-hitter has been dented this tournament whereas Jason Holder has not been able to live up to the tag of an all-rounder. Rashid and Mitchell Santner were going to be their key players since day one and they have performed quite well, however, a team cannot win with just two bowlers who can bat a bit.

Nyeem Young was used for only one over while Raymon Reifer finished with insane figures of 2 wickets in his solitary over. The pick of the bowler was Hayden Walsh Jr, who made a brilliant comeback after an expensive game as he picked 3 wickets giving only 19 runs.

The prediction is for Guyana Amazon Warriors to win the match 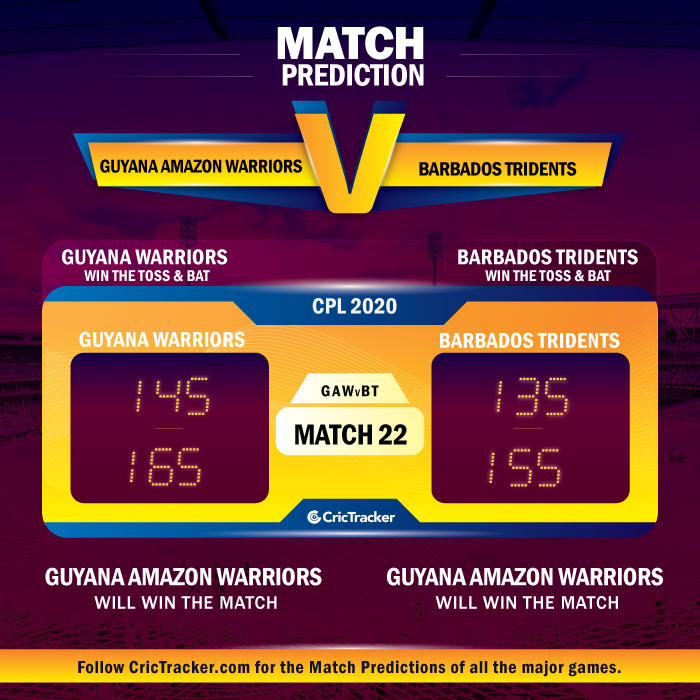