The hunt tonight is for Barbados Tridents as they still have some last hopes left to turn it around before the doors close upon them.

The 26th match of CPL 2020 is scheduled between the Guyana Amazon Warriors and the Barbados Tridents on 4th September, at the Brian Lara Cricket Stadium in Trinidad. Barbados Tridents have had a forgettable tournament thus far and they stand at the second-last spot in the points tally with 6 defeats and only 2 victories. The last game they played was against the same team they are set to face today. The Warriors ended up winning the match by 8 wickets after the Tridents had hit a new low and were dismissed for just 92 runs.

Jason Holder’s team was once in dire straits as the scorecard read 27 for 8, however, thanks to Rashid Khan, who played a 36-run cameo including a couple of sixes, and Mitchell Santner, whose 19 off 15 led their team to at least 92. The Tridents could have taken some heart by what they faced against the St Lucia Zouks, who they tumbled for 92 before being dismissed for 87 and eventually losing by 3 runs, however, their unit was unable to put up a show good enough to defend such a trivial total.

The Guyana Amazon Warriors have, on the other hand, won 5 of the total 9 league encounters and are located at the second spot in the table. They are coming into this match after a clinical victory of 7 wickets over the Zouks that has led them to qualify for the next stage and displace the Zouks from the top-two slot in the table.

Naveen-ul-Haq and Keemo Paul shone with the ball courtesy whose effort the Warriors restricted the Zouks for merely 109 at the loss of 7 wickets. Coming out to chase, Shimron Hetmyer got back to his ways after a few pale outings as he smacked 56 off just 36 deliveries and led his team to triumph in only 13.5 overs.

The massive victory repaired the reeling net run rate of the Warriors and effectively put it out of the equation for them with the semifinal berth booked. The hunt tonight is for Barbados Tridents as they still have some last hopes left to turn it around before the doors close upon them.

“The spinners will get assistance” has become the inevitable part when describing the pitch conditions in this year’s tournament and there is no change in that part. With the new ball, however, the pacers will have something on offer. The last two night-games have been a disaster for the batting side and the teams have been dismissed for unrealistically low scores. Therefore, choosing to field is a no-brainer.

With Brandon Kings scoring a half-century against the Tridents and Chandrapaul Hemraj scoring 26 off 25 against the Zouks, it seems that the opening troubles for the Warriors are finally resolving. Shimron Hetmyer, who made a rollicking start to the tournament before losing his touch, got back to making runs as he slapped a match-winning half-century in the previous game.

Nicholas Pooran has looked in great form ever since his century and he would look to continue alongside Ross Taylor in the middle-order. Kevin Sinclair, who was sent to open alongside King might be seen a little lower in the order in this game. Keemo Paul had a brilliant game as he bagged a couple of wickets and he has been contributing with the bat too.

Skipper Chris Green and veteran spinner Imran Tahir have been in good nick with the ball and both of them would want to continue getting the wickets. Naveen-ul-Haq has been in marvelous form and has outsmarted many around him.

Has the time come for Rishabh Pant to conquer the world?

Their entire unit fell like a pack of cards in the last game and the openers- Johnson Charles and Shai Hope, who both scored ducks- were no exceptions. Kyle Mayers is expected to come at his regular slot of No.3 and he will be assisted by Jonathan Carter, Justin Greaves, and Ashley Nurse lower down.

Jason Holder has been performing well with the ball, however, his form with the bat has taken a dip. He has promoted himself up the order and he might look to repeat the same. Mitchell Santner and Rashid Khan, who are expected to be their saviors with the ball, proved to be that with the bat as well in the last game, and therefore they can be promoted.

The prediction is for Guyana Amazon Warriors to win the match 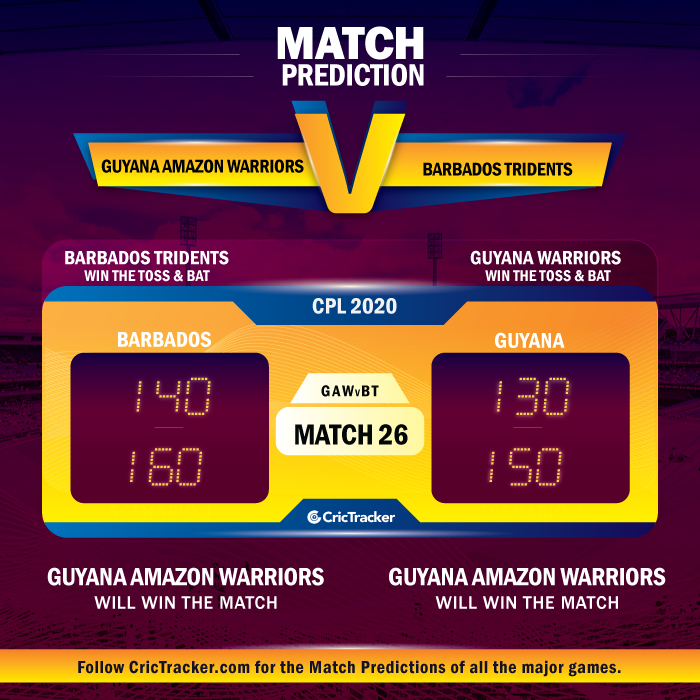