Will Arshdeep Singh be available for selection in the second T20I?

After a nail-biting victory in the first match, team India would be confident to seal the series when they take on Sri Lanka at Maharashtra Cricket Association Stadium in Pune on January 5, 2023. However, in order to do so, the Men in Blue need to improve their batting, which was under tremendous pressure in the initial overs of the first game.

When it comes to bowling, debutant Shivam Mavi impressed one and all with his stunning bowling display. The 24-year-old wreaked havoc on the Lankan batting line-up and gave India a perfect start with the new ball. Meanwhile, Umran Malik rattled the Lankan batters with his sheer pace and picked up two wickets.

Skipper Hardik Pandya, the 29-year-old, led by example. He backed a young squad and even rescued the team from a disastrous start. With the ball, he did pretty well as he still remains to be undefeated as a captain in the international circuit. However, will he make any changes to the playing XI or just like MS Dhoni, he will back the winning team? Needless to say that there’s plenty of talent waiting in the wings. With wickets tumbling from one end, southpaw Ishan Kishan remained calm and gave India a decent start under pressure in the opening game. The 24-year-old continued his good form and scored 37 off 29 deliveries before Wanindu Hasaranga got the better of him. Nevertheless, the wicket-keeper batter remains to be a threat as he has the potential to give India a blistering start in the second T20I. Overall, the Patna-born cricketer has played 22 T20Is and scored 626 runs at a strike rate of 129.07.

Meanwhile, his opening partner Shubman Gill couldn’t make the most of it on his T20I debut. The 23-year-old Shubman Gill scored just seven runs from five deliveries in the opening game and if he fails to prove himself in the second, Ruturaj Gaikwad might replace him in the third. Overall, Gill has played 96 T20 matches and scored 2584 runs at a strike rate of 128.74. Flamboyant Indian batter Suryakumar Yadav is in the form of his life. The cricketer ended 2022 as the number-one-ranked T20I batter but in the first match, Yadav failed to live up to his expectations. The 32-year-old scored only seven runs from ten deliveries and following his dismissal, India were under tremendous pressure. However, given his form and temperament, Surya is expected to step up and once again play a stellar innings.

There were a lot of protests on social media when Sanju Samson couldn’t make it to the playing XI during the T20I series against New Zealand. However, on his return, the stumper-batter failed to perform as he scored just five runs from six deliveries. Now, with so much talent waiting in the wings, Samson may not get a lot of opportunities to prove himself. Thus, he needs to capitalise on these chances and needs to be more consistent to cement his position in the T20I squad.

Deepak Hooda was adjudged the Player of the Match for his incredible performance in the first match. When India was under immense pressure, the 27-year-old played a scintillating knock of 41 runs off 23 deliveries and completely changed the complexion of the game. His bowling can prove to be valuable as well. Skipper Hardik Pandya proved his caliber in the first T20I and has the potential to get better in the second match. The 29-year-old scored valuable 29 runs with the bat and with the ball, conceded just 12 runs in three overs. His bowling changes were brave as well and overall, Pandya had a great game the last time around and will look forward to getting better.

Axar Patel played a thunderous innings with the bat scoring 31 runs off 20 deliveries. Now, even though he failed to pick any wicket with the ball, the 28-year-old managed to defend 13 runs in the final over to script an important victory in India’s favour. He has proved his mettle so far and has become an integral member of the Indian team. 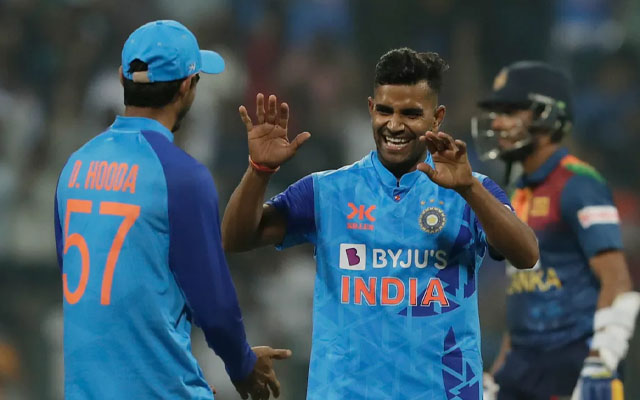 Even though Harshal Patel picked up two wickets in the opening game, the pacer wasn’t at his best. The 32-year-old conceded 41 runs in his four overs and also failed to do well in the death overs. Thus, when Arshdeep Singh returns, Harshal might get dropped and to avoid that, the cricketer needs to find some form.

The duo of Shivam Mavi and Umran Malik did really well in the first match. Mavi, on his debut, picked up four wickets while Umran, with his sheer pace, rattled the opponent to pick up two wickets, giving away 27 runs in his four overs. These two cricketers are once again going to be a massive threat to the Lankan batters.

Meanwhile, Yuzvendra Chahal’s form has been very concerning. The leg-spinner conceded 26 runs from two overs in the first match and never felt threatening. However, the leggie is a champion bowler and would be keen on making a comeback in the second T20I.