The final will be held at the Melbourne Cricket Ground on Sunday (November 13).

Pakistan will square off against England in the final of the T20 World Cup 2022 at the Melbourne Cricket Ground on Sunday, November 13 and it is expected to be a cracker of a contest. Both teams are coming into the summit clash on the back of domineering victories in their respective semi-finals and they definitely know what it takes to win the T20 World Cup having won it once already.

The Men in Green outclassed New Zealand in all the three departments and produced a scintillating performance in the semi-final. While no one expected them to make the semis, the Babar Azam-led side has fought back well and the bowlers have been doing a fantastic job. Mohammad Rizwan and Babar returning to form is a great news for Pakistan fans.

England, on the other hand, are coming off a thumping win against India and executed their plans to perfection in the semi-final.

Look at Pakistan's predicted playing XI for the final against England: Mohammad Rizwan wasn't having the best of tournaments coming into the semi-final; however, he stepped up in the crucial game and played a match-winning knock. The right-hander scored a 43 ball-57 and his form is going to be crucial to Pakistan’s plans in the final. Rizwan can play long innings once he gets his eye in.

Babar Azam is one of the top batters going around and he can make look batting easier in his prime. The skipper was back to his form in the previous outing where he scored a half-century and Pakistan look a completely different side once he starts scoring runs. All eyes will be on him in the crunch game against England. 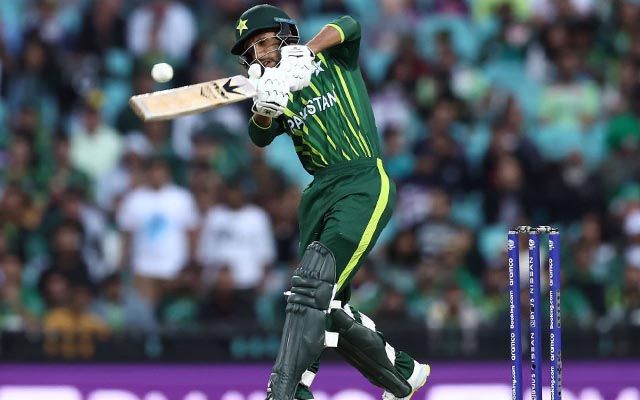 Mohammad Haris has played three exceptional innings in his last three outings and has provided just what the doctor ordered for Pakistan in terms of strike rate. The right-hander has managed to up the ante straightaway whenever he has come onto the crease and he will be looking to play another impactful innings.

Shan Masood has been a tremendous addition to the Pakistan line-up and he has looked quite calm and composed even with the wickets falling around him. The left-hander has adapted to the middle order like fish to water despite opening the innings being his preferred position. He will have a big role to play in terms of absorbing pressure.

Iftikhar Ahmed has been a vital cog in the Pakistan batting unit and has played some mature knocks in the tournament. The right-hander has got the skills to go big and he showed that in the game against India. He can also roll his arm over if needed and a lot will be expected out of him if the side is in trouble. Shadab Khan has been one of the players of the tournament so far and his all-around abilities have been quite useful for the side. The leg-spinner has managed to pick up wickets consistently and he also played a breathtaking knock against South Africa. Shadab is making a huge mark in international cricket and will be one of the first names on the Pakistan sheet.

Mohammad Nawaz’s presence hasn’t been felt much in the last few games, however, his match-winning abilities cannot be underestimated. The left-arm spinner’s responsibilities with the ball have come down after the inclusion six bowling options and he might be needed more with the bat unless the track offers a lot of spin. Mohammad Wasim has made a big difference to the bowling unit once he came into the playing XI and has been executing yorkers to perfection in the death overs. The speedster brings a different variety by hitting the bat hard and is a wicket-taking option with the ball always.

Shaheen Afridi is slowly finding his rhythm with the ball as he has managed to get early breakthroughs in the last couple of games. The left-arm seamer has kept a hold on the scoring rate and his economical spells have put a lot of pressure on the batters. The youngster is world-class if he is fully fit and it is evident in his performances.

Haris Rauf has consistently hit the 150 Kmph mark and has used bouncers to perfection. His ability to hit back of a length at a raw pace has troubled the batters and has been one of the silent performers in the side. The right-arm quick is a big part of Pakistan’s successful campaign and deserves a lot of credit.

Naseem Shah has shown a lot of maturity despite being quite young and he is a future star in the making. The youngster is cranking up high speeds and is not afraid to bowl the tough overs for his side. He can swing the new ball upfront and has made the ball talk a lot so far.