The defending champions Deccan Gladiators would look to continue their splendid run when they face a demoralized Chennai Braves.

The defending champions Deccan Gladiators (DG) will be locking horns with the Chennai Braves (CB) in Match 18 of the Abu Dhabi T10 League 2022 at the Sheik Zayed Stadium in Abu Dhabi on Tuesday, November 29. The Gladiators have made a strong statement so far and have indeed proved why they are the title-holders showcasing consistent performances on the field.

The Deccan Gladiators currently occupy the top spot in the points table having won three of their four matches with six points to their tally. They have a superior net run rate of 1.900. The reigning champions would be heading into this encounter on the back of an 18-run victory over the Delhi Bulls.

The Chennai Braves, on the other hand, are really struggling to get going this time around. They have been one of the most inconsistent teams as a result of which the Braves find themselves languishing at the sixth position with just a solitary win from three outings and two points at a dismal NRR of -0.093. Chennai would be hoping for a revival in fortunes when they face the Northern Warriors prior to this clash.

Usually the dew factor makes its presence felt at the Sheikh Zayed Stadium surface as the contest progresses, thereby, making batting easier in the second innings. However, the team fielding first must restrict the opposition to a manageable total. Therefore, the captain winning the toss will look to bat.

Tom Kohler-Cadmore was the star of the last match for the Deccan Gladiators against the Delhi Bulls as he played a match-winning knock of an unbeaten 82 runs off 33 deliveries at an outstanding strike rate of 248.48. Tom’s explosive knock also bagged him the Player of the Match and he would be hoping to showcase an even better performance.

Even though the Chennai Braves have showcased a disappointing performance collectively, there has been one individual performance from them which has come from the seasoned Caribbean all-rounder Carlos Brathwaite. Brathwaite has been consistent with the ball in hand having registered five scalps to his name from three matches averaging 8.40 and an economy of 8.12. 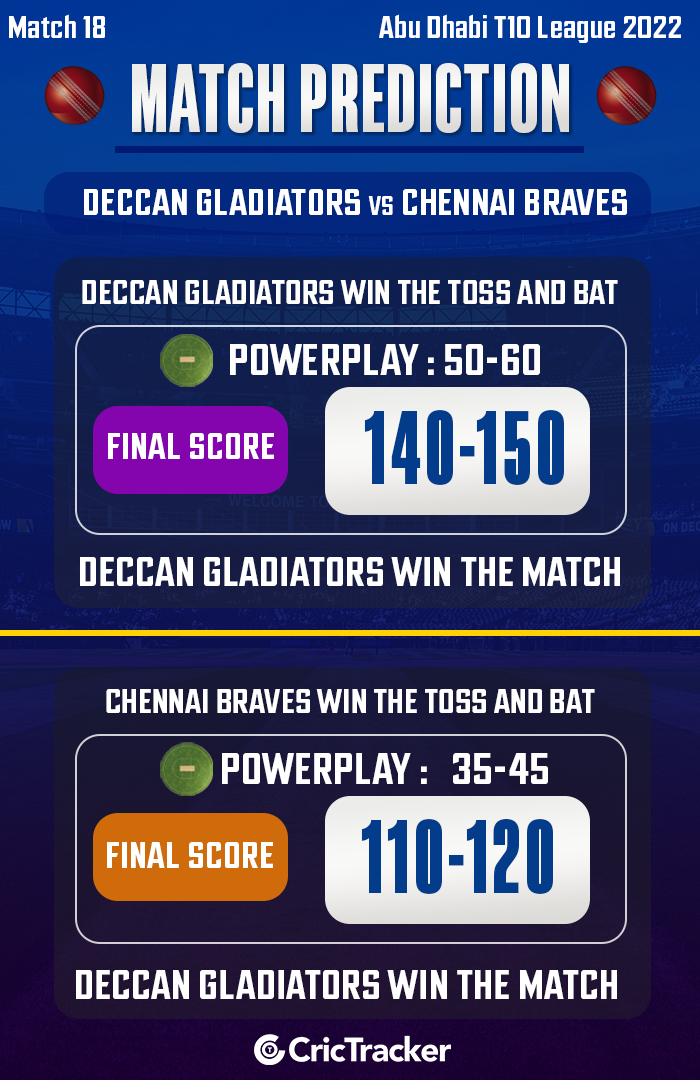