Barbados Royals have won all of their opening six matches this season.

Barbados Royals and Jamaica Tallawahs will lock horns in the 19th match of the Caribbean Premier League 2022 (CPL) at Queen's Park Oval in Port of Spain on Thursday. Barbados Royals beat Trinbago Knight Riders in their last match to register their sixth straight win of this season. Afghanistani spinner Mujeeb Ur Rahman, playing his first CPL match this season, took three wickets for 17 to bowl out the opponent for just 132 runs. Then in-form all-rounder Kyle Mayers smashed his third fifty of this edition to guide Royals to a big eight-wicket win with four overs remaining. With this win, they have cemented their top position further with 12 points in six matches.

Meanwhile, Jamaica Tallawahs lost against St Kitts and Nevis Patriots in their last match to suffer their third defeat of the season. They scored 139 runs while batting first with Raymon Reifer scoring the highest 40 runs but bowlers failed to defend the target as the Patriots easily chased the target with eight wickets remaining on D/L method. The Tallawahs are placed in the second position in the league table but have only six points in six matches so far. The Royals won their first match against the Tallawahs by eight wickets and are favorites to win again on Thursday.

The pitch at Queen's Park Oval is equally balanced for both batters and bowlers. Pace bowlers are likely to get extra help with a new ball but fans can expect a high-scoring clash if the Royals bat first on Thursday. The Royals easily chased the 133-run target in their last match here and are expected to dominate the contest again.

The in-form Caribbean all-rounder has been the best player of the tournament with three fifties and six wickets so far. Mayers smashed 79 runs off just 36 balls against the Knight Riders in the last match and now leads the scoring chart with 285 runs in just six matches at an average of 47.50 and an impressive strike rate of 164.73 so far. He scored only 12 runs against today's opponent in their reverse match of the season but took a wicket while conceding only 11 runs.

The star West Indies all-rounder is in sensational form for the Royals this season. He took two wickets while conceding only 30 runs against the Knight Riders in the last match after having a two-for-24 spell against Jamaica Tallawahs in the previous match. He has taken eight wickets from the opening six matches for the Royals at an average of 15.87 and an economy rate of only 7.05 this season. 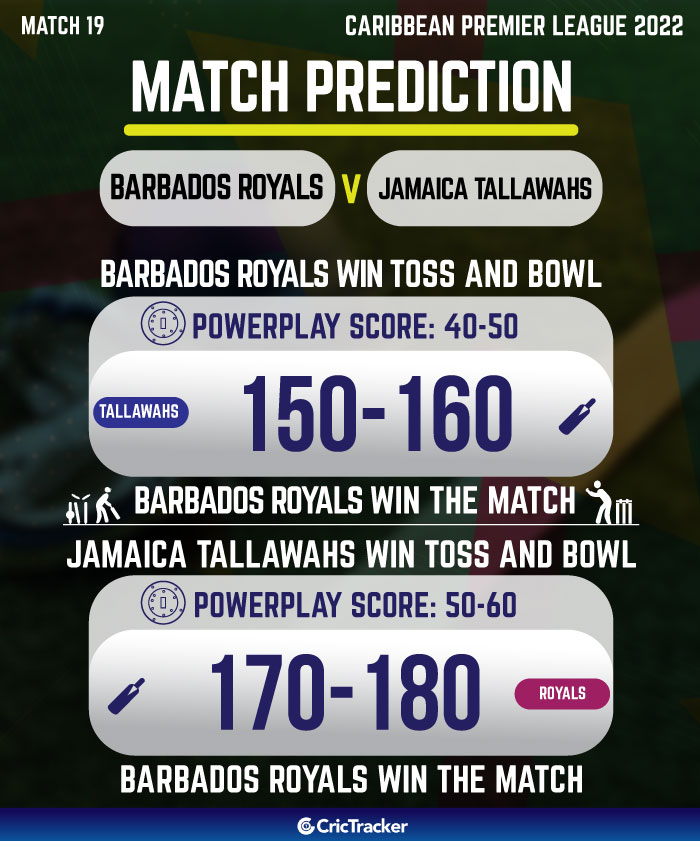 Disclaimer: Disclaimer: This prediction is based on the understanding, analysis, and instinct of the author. While making your prediction, consider the points mentioned, and make your own decision.