In the tournament so far, Desert Vipers and MI Emirates have each won three of their four games.

Desert Vipers (VIP) will lock horns with MI Emirates (EMI) in the 15th match of the International League T20 2023 (ILT20) at Zayed Cricket Stadium on Tuesday, January 24. Desert Vipers had a great start to their campaign, having won the first three games of the season. However, they failed to continue with the winning momentum and succumbed to defeat at the hands of Gulf Giants. They would be eager to make amends and put up a better show in the clash against Emirates.

MI Emirates have followed a similar script in the tournament, having won their first three games and losing the fourth one. When Kieron Pollard & co. take the stage alongside Vipers, they would look to bring their A-game into play and get back to the winning ways.

The surface at the Zayed Cricket Stadium has been excellent for batting. In the last five matches played at the venue, the team batting first has won three times. Interestingly enough, both Vipers and Emirates have a formidable batting line-up, and as a result, one can expect them to back their batters and hunt down any total. Thus, the sides might decide to bowl first after winning the toss.

Alex Hales has set the tournament ablaze with his spectacular batting exploits. He has plundered 356 runs in four matches at a stunning strike rate of 165.58. The England batter has been in pristine touch and it would not be a surprise if he puts up a show in the game against MI Emirates.

Dwayne Bravo has weaved his magic in the International League T20 2023. He has featured in three games and bagged five wickets at an economy of 7.00, which is quite brilliant considering he has bowled a lot at the death. Bravo would look to bamboozle the opposition batters with his variations in the coming game and wreak havoc with the ball. 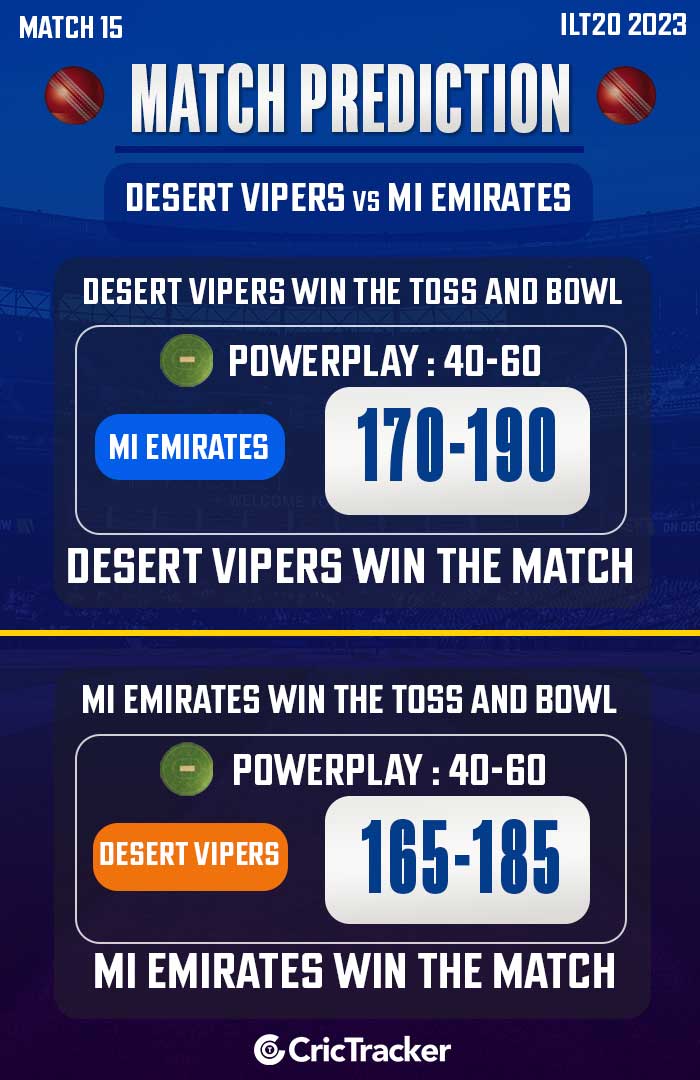