India Legends will lock horns with West Indies Legends in the sixth of the Road Safety World Series (RSWS) 2022 in Green Park, Kanpur, on September 14, Wednesday. The Indian side, led by Sachin Tendulkar, will come into the match on the back of a comprehensive 61-run win over South Africa Legends in the opening match.

India Legends also earnt a healthy net run rate of 3.050 and are on top of the table. West Indies also won their first match against Bangladesh by six wickets, chasing a target of 99 in only 15.2 overs. It was pacer Krishmar Santokie who caused the damage in the first innings, bagging three wickets for seven runs in 2.4 overs.

The Green Park wicket has been an ideal surface to bat on. It has hosted all four matches of the tournament so far, and there have already been two scores of above 200 and a score of 180. Spinners are expected to come into play and pick a few wickets as the innings progresses. The team winning the toss must bat first and put runs on the board.

Suresh Raina looked to be in good shape and rhythm in the first match against South Africa Legends as he played some elegant shots and scored a well-made 33 off 24 with four fours and a six. Like in the first match, he might come in at number three again, giving him time to convert a start into a big innings.

Rahul Sharma announced his retirement from all forms of the game recently. But the leg spinner, in the first match, showed that he still has got some fuel left in his tank. He bowled a game-changing spell of three wickets for 17 runs in four overs and prevented South Africa from having a chance in the game. He could be the difference yet again against West Indies on a familiar surface Green Park surface. 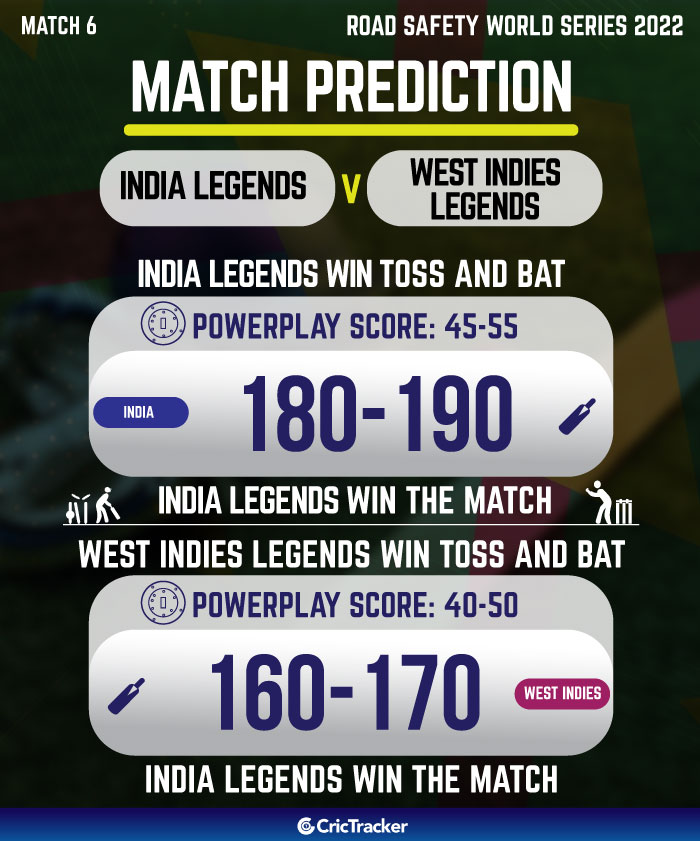