St Kitts and Nevis Patriots will be eyeing revenge after defeat to St Lucia Kings in the reverse fixture.

St Kitts and Nevis Patriots and St Lucia Kings will square off in the 20th match of the 2022 Caribbean Premier League at the Brian Lara Stadium, Tarouba, Trinidad. The St Lucia Kings, led by Faf du Plessis, defeated their opponents in the reverse fixture by 61 runs.

On the other hand, St Kitts and Nevis Patriots bounced back from the surprising defeat by hammering Jamaica Tallawahs by eight wickets in their previous encounter. Dwayne Bravo's side are currently in the third position in the points table and will hope to climb up the table after a win against St Lucia Kings.

The surface at the Brian Lara Stadium is a neutral wicket where both departments are expected to earn a reasonable amount of help. But the spinner are expected to play a crucial part in the match, especially in the second innings, when the pitch dries up considerably. The team winning the toss would likely bat first on the venue to utilize the freshness in the wicket.

St Lucia Kings' Johnson Charles is the second leading run getter in this year's tournament with 227 runs to his name in just six outings. The powerful opening batter would like to continue his form and topple Kyle Mayers in the run-scoring charts, who has played one more game than Charles in the tournament.

Rashid Khan made an instant return with his return to the CPL by returning with exceptional bowling figures of 8/1 in his four overs in the previous encounter against the second-placed Jamaica Tallawahs. The mercurial leggie missed the initial matches due to his commitment s with the national team in the recently concluded 15th edition of the Asia Cup. He will be a handful for the batters on a slowish surface at the Brian Lara Stadium. 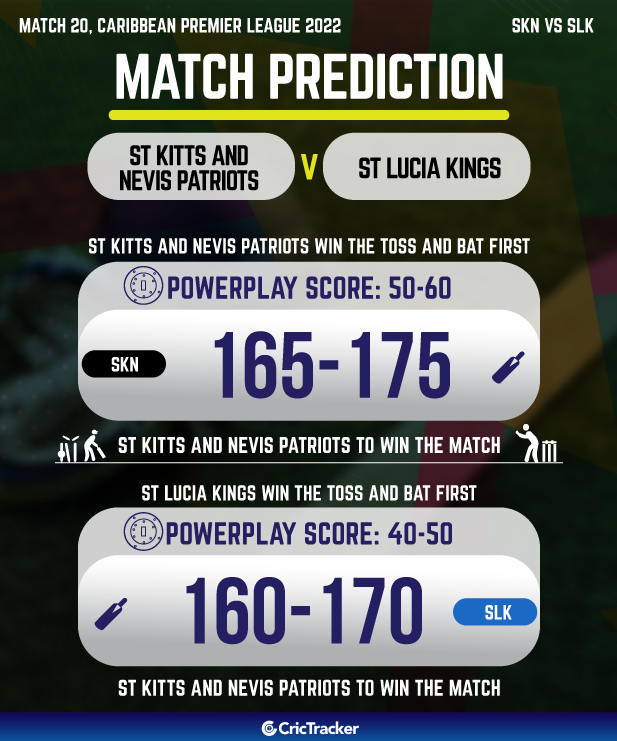