CricTracker Exclusive: Faf du Plessis feels Kagiso Rabada will trouble him the most in MSL 2019

CricTracker Exclusive: Faf du Plessis feels Kagiso Rabada will trouble him the most in MSL 2019

He also opened up about how important MSL is for South Africa cricket.

South Africa skipper Faf du Plessis has got off to a brilliant start leading the Paarl Rocks in the ongoing Mzansi Super League (MSL) 2019. The team defeated the Cape Town Blitz by a massive 86-run margin and will be looking to continue the winning momentum in the near future. Du Plessis looks excited to be part of South Africa‘s own T20 tournament having played in the number of leagues across the world.

Being the most experienced player in the side, Faf du Plessis will be looking to lead from the front and make sure the team is in good stead this season. The man himself looked in full flow during the team’s opening game scoring 38 runs off just 20 deliveries. He will now be hoping to carry on the good form not only in the MSL but also at the international level with the T20 World Cup round the corner.

In an exclusive interview to CricTracker, Faf du Plessis opened up about how MSL is important for South Africa cricket and the player who has impressed him the most in the tournament. He also spoke about the young bowler Thando Ntini and also named the bowler who might trouble him during the MSL this season.

Question: What are the challenges you are looking forward to while leading Paarl Rocks?

Answer: No real challenges. Just working with a smaller franchise to make sure everything runs smoothly so one can set up a great environment for people to feel comfortable and enjoying their cricket.

Question: Your thoughts on the young Thando Ntini? Have you faced him in the nets?

He (Thando Ntini) looks like a nice young kid. Only faced him once. He has got something. Still young and raw but definitely a lot to work with.

About Thando Ntini – Thando Ntini, son of former South Africa fast bowler Makhaya Ntini, is an aspiring 19-year-old player who has impressed many in a short period of time. He played for South Africa in the U19 World Cup 2017-18 and picked up three wickets in as many pitches.

Ntini has already made his first-class debut for Cape Cobras and has 18 wickets to his name in just 6 matches. He can certainly make the new ball talk and during his stint with the Paarl Rocks, Ntini has a chance to impress the South Africa skipper with his performances. He definitely has the potential to play and shine for South Africa.

Question: Last year in MSL, you got eliminated due to rain. Do you think there should be a reserve day at least for the knockout matches?

Answer: Yes, I do and that’s why there is a spare rain day this year.

Paarl Rocks’ performance in MSL 2018 – Paarl Rocks had a brilliant season last year as they ended up at the third position in the points table with 22 points to their name. The team led by Faf du Plessis was slated to face the second-placed Jozi Stars in the eliminator. But the game was abandoned due to rain and the Stars, with more points and wins than the Rocks, qualified for the finals. There was no reserve day for the knockout game in the previous edition and Paarl Rocks’ promising campaign ended on a sour note. 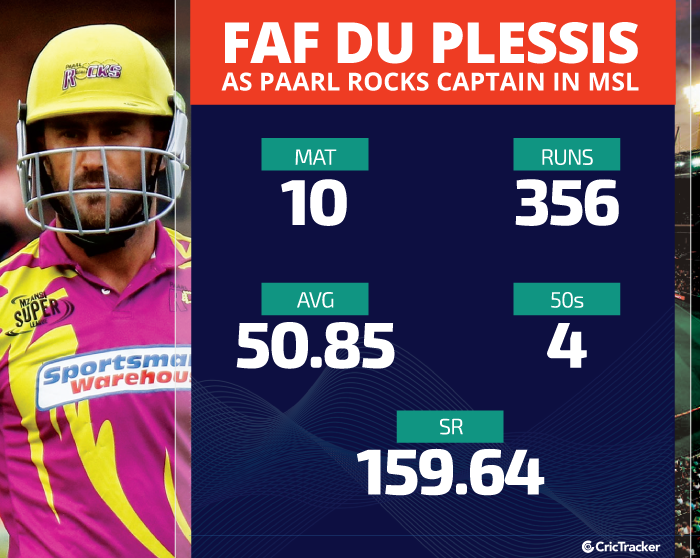 Question: Steyn, Rabada or Morkel? Which bowler will you find it tough facing during the MSL?

Leader of South Africa’s bowling attack – Kagiso Rabada has taken over superbly from the likes of Steyn and Morkel to become the leader of South Africa’s bowling attack. He has troubled renowned international batsman with his pace bowling and has been playing relentlessly after making his debut for his country. Rabada has so far picked 183 Test, 117 ODI and 28 T20I wickets and looks set to smash records in the next few years.

Question: Which young player has excited you the most in MSL?

Promising talent – Another young batsman from South Africa who has hogged the limelight is Janneman Malan. He got off to an exceptional start to his MSL 2019 season with a scintillating 99* against the defending champions Jozi Stars while playing for Cape Town Blitz. He featured for the same team last season as well and went on to amass 305 runs in nine outings at an average of close to 34 and a strike-rate of 125.51.

Janneman Malan also made his international debut in February this year in the T20Is and is the one to watch out for in the near future. With the T20 World Cup less than a year away, it should be no surprise, if he opens for South Africa in the tournament in Australia in 2020.

Question: How important is MSL for South Africa cricket?

Answer: Extremely important. The standard is really good because all the national players are available. Great for our guys to play with experienced players all the time.