Will Ricky Ponting send Marcus Stoinis ahead of Rishabh Pant in the game between Delhi Capitals and Kings XI Punjab?

The opening match of the 2020 IPL between Mumbai Indians and Chennai Super Kings saw some surprises in the terms of fantasy. Sam Curran, least expected to feature straight away, turned out to be the MVP of the first game. While performances from Faf du Plessis and Ambati Rayudu might not come as a surprise, the inclusion and performances of James Pattinson and Saurabh Tiwary in Mumbai’s XI did leave many experts stunned. The second match of the tournament will be played between Delhi Capitals (DC) and Kings XI Punjab (KXIP) in Dubai.

Who can be left out from previous match?

Going by the pre-tournament buzz, Kedar Jadhav looked like having a decent shot in the first match with both bat and ball. But the inclusion of Sam Curran meant he was the only player across both teams to not have batted or bowled during the opener. Hence, he is an easy choice to be removed if picked.

If you included the likes of Faf du Plessis, Ambati Rayudu, Sam Curran, Lungi Ngidi and Piyush Chawla for the first game, not more than three of them can be retained. Hardik Pandya didn’t bowl in the first match but against KKR, he could be seen performing with the bat itself so he can be retained along with Rahul Chahar.

The KLR factor in DC vs KXIP today’s IPL match:

KL Rahul for the Kings XI Punjab is as consistent as David Warner for Sunrisers in the IPL history. Across 28 IPL matches for KXIP, Rahul amassed 1252 runs at an average of 54.43 and a strike rate over 140 with 12 fifties and a hundred. It is no brainer to pick him in the fantasy team and even make him either captain or vice-captain. Do mind that Rahul is now captain which could mean he might cut down risks early on and score 50+ runs even more often.

A big factor to look out during the match between DC vs KXIP is the batting position of Rishabh Pant. Considering Ricky Ponting’s pre-season comments, we can expect Hetmyer and Stoinis to bat ahead of Pant. Delhi already has a top three of Shikhar Dhawan, Prithvi Shaw and Shreyas Iyer which means Pant might not get enough balls to face. Hence, it won’t be ideal to spend a lot over the young keeper straight away and instead, we can bank on Stoinis who could even bowl 1-2 overs.

We expect the likes of Shreyas Iyer and Kagiso Rabada to perform well from the DC team while the Karnataka trio of Rahul, Mayank and Krishnappa doing the job for the KXIP. Not more than two players from Delhi are preferred as they play only once in the first six matches. Mayank has impressive numbers against spin bowling and could enjoy facing the DC team’s bowling. 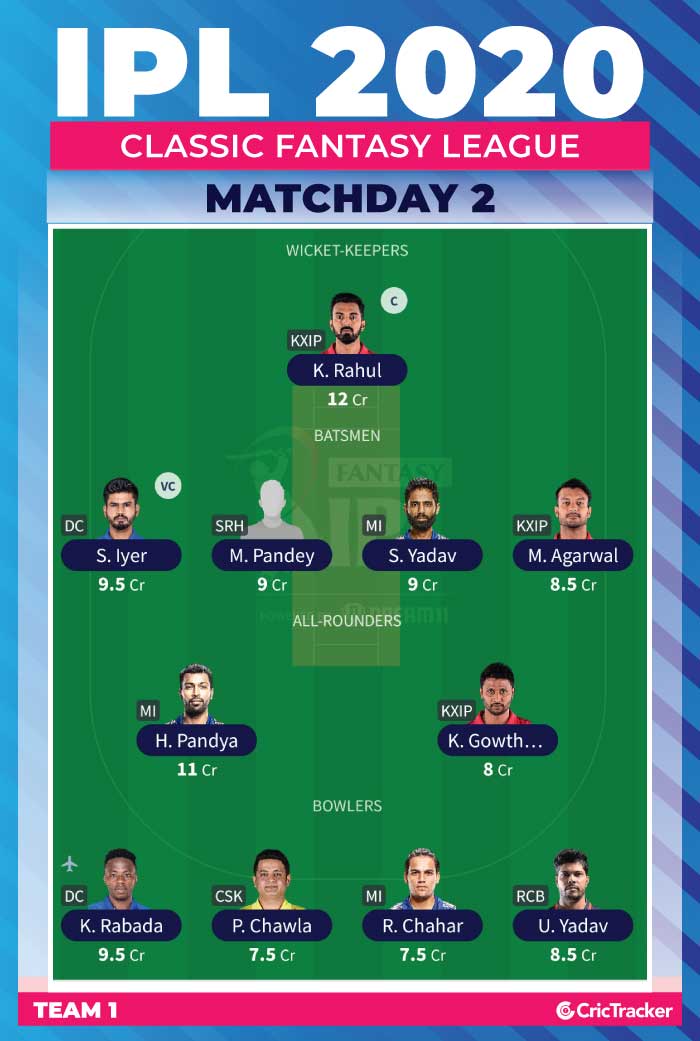 In this team, we take a risk of picking three players from Delhi Capitals despite not having them featuring in any of the next four games. Harshal Patel could be a valuable pick considering his batting ability. His chances of featuring in the XI are boosted after Ishant Sharma being ruled out for indefinite time. We have picked Glenn Maxwell from KXIP purely based on his recent form and his record in the UAE during the 2014 IPL. 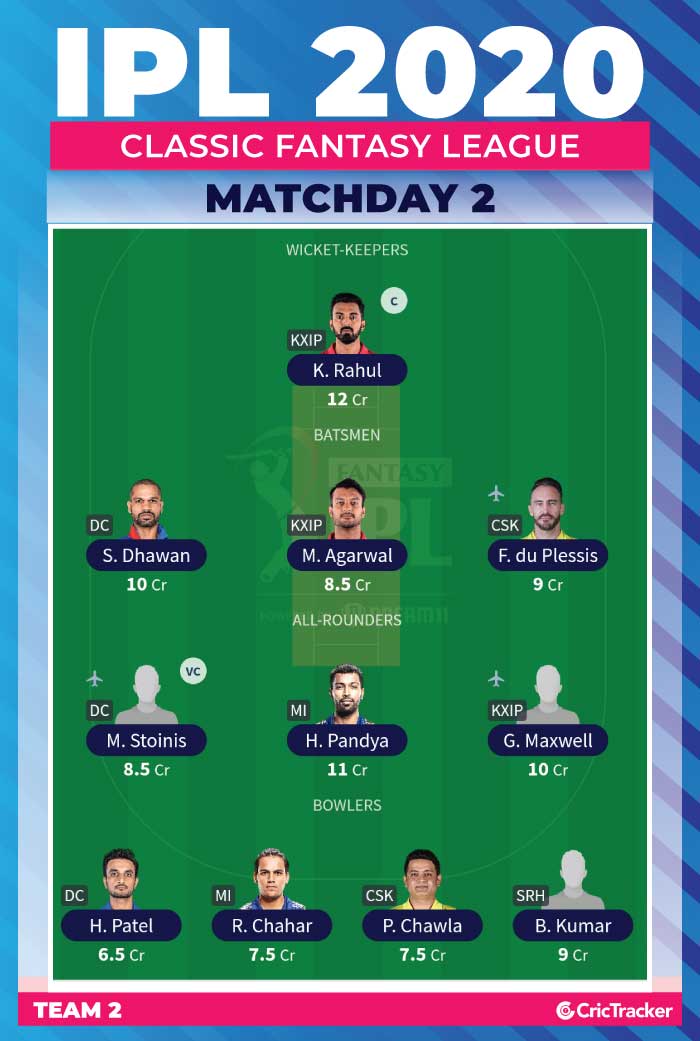