The Capitals need a win to reclaim their spot in the top two.

Mumbai Indians (MI), after their victory over the Royal Challengers Bangalore (RCB), have almost sealed their berth in the playoffs. With a net run rate of +1.186, it needs something supernatural to see them out of the next round.

Their next match is against the Delhi Capitals (DC) on Saturday, October 31 at the Dubai International Cricket Stadium and the game is expected to be a cracking one. In their previous meeting, it was MI, who came out trumps in Abu Dhabi.

However, it’s also pertinent to note that Mumbai have lost both their games in Dubai after the matches went into the Super Over. The Capitals, led by Shreyas Iyer, on the other hand, aren’t in the best of rhythms by any means. Having lost three matches on the trot, they will be desperate to get back to winning ways.

The pitch in Dubai has been a pretty decent one for batting and shot-making hasn’t been all that easy The batters can put pressure on the bowlers, getting some quick runs in the powerplay. The track has a bit, both for the pacers as well as the spinners.

The playing conditions will be warm with the temperature around the 32 degrees Celsius mark. The humidity is expected to be in the low 30s.

Playing Combinations for DC vs MI

Shreyas Iyer has floated around the batting order and came to the middle after very long during DC’s previous game against the Sunrisers Hyderabad (SRH). However, he might again be going up the order, keeping in mind the talent he possesses.

Quinton de Kock has flourished for the Mumbai-based franchise in the T20 tournament. In 12 matches, the left-handed batsman has 392 runs to show his efforts. The South African cricketer has an average and strike-rate of 39.20 and 140 respectively.

In the last game, he couldn’t quite get going. But that he scored 53 the last time DC faced MI would give de Kock a whole lot of confidence.

DC vs MI Head to Head 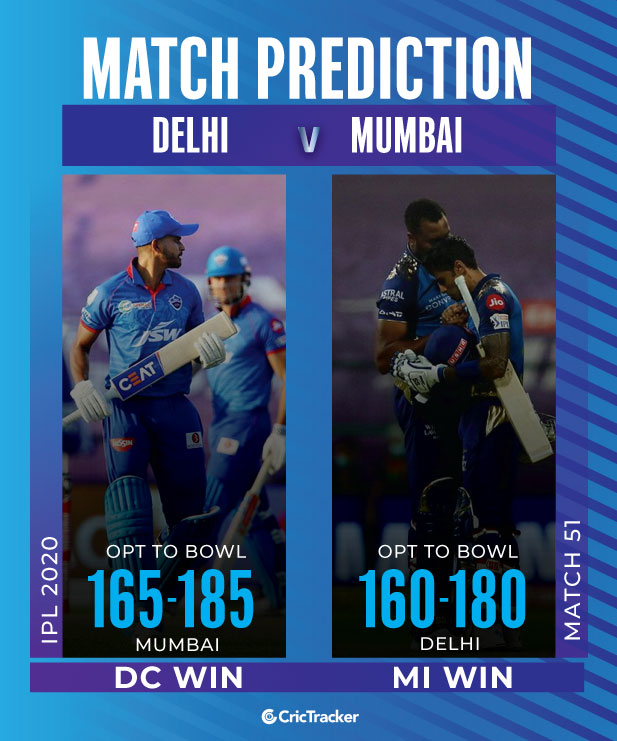