It will be a high-scoring game at the Wankhede Stadium. Make your teams accordingly. 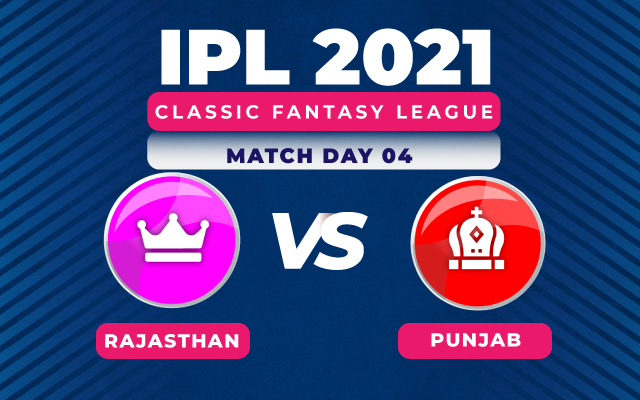 The fourth match in this IPL 2021 Season will start at 7:30 PM IST between Rajasthan Royals (RR) and Punjab Kings (PBKS) in Mumbai. In this article let us discuss the Season Long Fantasy League team setup for Match 4.

The last match at Wankhede between Delhi Capitals (DC) and Chennai Super Kings (CSK) turned out to be a run-fest. With some of the biggest hitters in today’s match, this can very well be another high-scoring game. So, we need to make our transfers with an emphasis on the high-scoring batsmen.

Players available for the Current Match: None

Number of Transfers: Three (+ One uncapped)

Jonny Bairstow(SRH): Since SRH will be playing their next match in two days, we will move out Jonny Bairstow from our fantasy team.

Nitish Rana(KKR): We can get Nitish Rana back to the team for the next KKR match using uncapped transfer. So we can move him out from the team easily.

Shakib Al Hasan (KKR): We brought Shakib into our fantasy team as KKR are going to play two matches in three days. However, we can see that Shakib is batting way too down the order. In this position, he will not get many deliveries to face. Since we can not leverage his all-round potential, we transfer him out. However, Shakib might bat up the order, if KKR loses quick wickets early.

After the final XI is announced, if there are interesting moves happening, we will try to retain Shakib Al Hasan in our fantasy team.

Ben Stokes (RR): Ben Stokes is our first choice pick, as he is likely to open the batting and he bowls as well.

Mayank Agarwal (PBKS): KL Rahul is our second-choice pick from the current match. However, he is too expensive to fit in our team combination. So we are settled with Mayank Agarwal. He bats in top three and he was in great form last season.

Sanju Samson (RR): It was a trend that Sanju Samson starts the season on a big note but could not carry that momentum. Hopefully this time with the captaincy responsibilities, he will be playing consistently and earns good fantasy points. We want to cash in early before he loses his steam.

Kartik Tyagi (RR): Rahul Tewatia (RR) is our first choice uncapped pick. However, we have a bowling slot vacant in our fantasy team. So we choose to go with Kartik Tyagi. Kartik Tyagi was a good find last season and bowled quite well in the death overs.