ENG vs AUS, 2nd ODI - Match Prediction: Who will win the match?

ENG vs AUS, 2nd ODI – Match Prediction: Who will win the match, England or Australia?

England have already taken the lead by winning the first match of the series by 3 wickets and it is the visitors who have to make a move now. Australia bowled well the other day but the score of 214 runs posted by their batsmen was not enough to defend in the modern-day game. They will have to bat well and improve their technique against the spinners to put up a fight. However, it will not be easy for them to go past this strong England unit which is tough to beat at home.

Tim Paine would feel gutted about the fact that they didn’t make the use of a fresh pitch at Kennington Oval in London. He would be hoping that the batsmen including him make amends for their earlier effort and put up a good show. England, on the other hand, were not convincing with the bat either and lost 7 wickets to chase down the meagre total. The top order looked brittle and it was only due to Eoin Morgan and Joe Root that they managed to gun down the total.

The game will be played at Sophia Gardens in Cardiff and the pitch at the venue is mostly on the slower side. The spinners will be more effective this time around and expect the wicket to turn more as the game progresses. Also, the team batting first has to make sure that they post a formidable total on the board through which they can trouble the opposition by unleashing the spinners.

England is unlikely to make any changes to their line-up which did so well in the first ODI. Though they wil hope the top three, Jason Roy, Alex Hales and Jonny Bairstow make some runs in the continued absence of Ben Stokes. Moeen Ali was the best bowler for them in the last match and has to play a similar role on a slow wicket in Cardiff as well. Even Adil Rashid and the pace battery was effective as the home side will be expected to dominate the proceedings again.

Australia will look to strengthen their batting and might bring either D’Arcy Short or Alex Carey at the top of ther order. Aaron Finch has to come down the order to handle the proceedings and play a big knock if Australia are hoping to post or chase a formidable total. Moreover, Ashton Agar will be crucial again as he went wicketless in the first match. He should improve his bowling and understand that his role is not only to keep a lid on the run-scoring. Among the pacers, Kane Richardson will be the one to miss out who was the least effective.

The prediction is for England to continue their winning streak against the Aussies and take the 2-0 lead in the series. 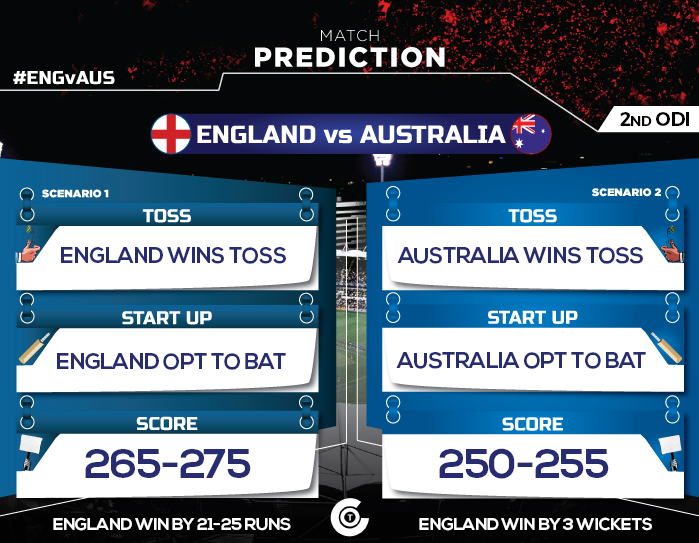