ENG vs AUS, 5th ODI – Match Prediction: Who will win the match, England or Australia?

ENG vs AUS, 5th ODI – Match Prediction: Who will win the match, England or Australia?

Another belter of a track can be put forth by the curators.

Australia’s campaign in England has gone from bad to worse and they are now standing on the verge of a humiliating whitewash in the ODI series. Tim Paine, their skipper, has the task to somehow keep his men charged up in order for them to give their opponents a run for their money in the fifth match at Old Trafford in Manchester. The Britts have been on a rampage and won’t make their task any easier.

The Aussie bowling attack has seemed toothless thus far and Eoin Morgan & Co. have left no stone unturned in piling on their despair. They are the number one ranked team in ODIs and would wish to decimate Paine’s men one last time before the teams head to Birmingham for the one-off T20I on June 27, which will also mark the end of the series, most importantly the visitors’ misery.

The tracks in the last four matches have favoured the batsmen and it’s expected to be no different even in the last match. With the home team’s batters in prime form, another belter of a track can be put forth by the curators. The conditions are speculated to be cool throughout the match with the sun remaining behind the clouds for a chunk of the day.

England may make some changes. The opening stand of Jason Roy and Johnny Bairstow remains the same. Alex Hales’ is the number three batter. The management may want to rest Joe Root and give Sam Billings, who hasn’t had much to do in the series, an opportunity. Eoin Morgan, Jos Buttler, and Moeen Ali are the experienced heads in the lineup.

In the bowling department, there can be a couple of replacements. Tom Curran deserves to get an opportunity, with the series being sealed. Jake Ball is another bowler who can be tested out. Craig Overton, despite his lacklustre show, will get another chance. Moeen Ali and Adil Rashid have been phenomenal and the Poms won’t want to tinker with the spin department.

The Aussies have nothing to lose in the series. They have made all sorts of changes, but hardly anything has worked out for them. Aaron Finch and Travis Head remain to be their openers with Shaun Marsh at number three. Alex Carey will get his second go. Marcus Stoinis hasn’t lived up to expectations and Glenn Maxwell may be drafted in place of the all-rounder.

In the bowling lineup, Jhye Richardson may be sidelined and either of Andrew Tye or Kane Richardson may be roped in. Billy Stanlake and Michael Neser are the other bowlers. The spinners in Nathan Lyon and Ashton need to play their part if the Yellow Army is to avoid the humiliation of the ‘speculated’ clean-sweep. The part-time off-breaks of Maxwell will also be crucial as well.

The prediction is for England to complete a resounding clean-sweep and finish 5-0. 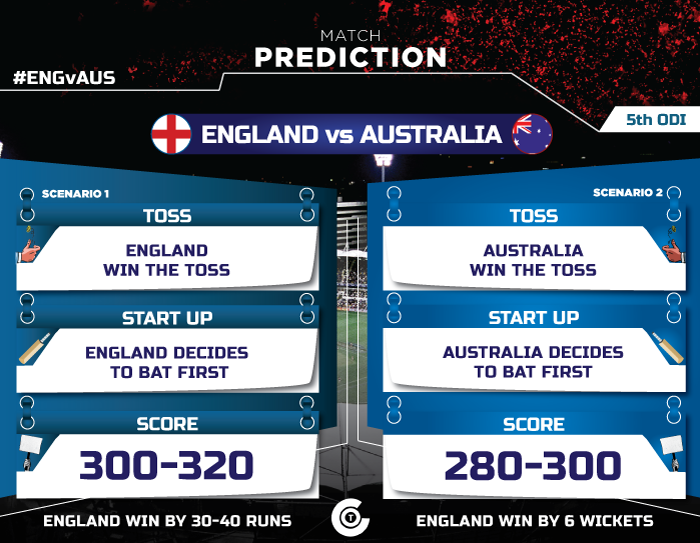