Ireland have beaten England only once in ODIs, back in the 2011 World Cup.

Amidst the COVID-19 pandemic, ODI cricket is all set to make its comeback. Following their series against the West Indies, England are scheduled to lock horns with Ireland in a three-match ODI series, starting Thursday, July 30. All the matches would be taking place at the Rose Bowl in Southampton. Both the teams have already announced their squads for the opening encounter.

Eoin Morgan and Co would be making a return to white-ball cricket after five and half months following their ODI series versus South Africa. However, they must be up and running after the intra-squad games and the warm-up fixtures against Ireland. The visitors, on the other hand, last played in the T20I series against Afghanistan in March and they would be keen to put up a strong show.

The pitch in Southampton has been a reasonable one for batting with an average score of 269 in ODIs. Moreover, 14 out of the 26 completed games were won by the team, batting first. But since the chasing teams have also won quite a few matches, batting second won’t be the worst of choices either. There are no chances of rain with the temperature around 20 degrees Celsius.

For the Brits, Jason Roy and Jonny Bairstow will be opening the batting. To the surprise of many, Phillip Salt, who scored a century in the warm-up game, was left out. Joe Denly has played international cricket recently as he was a part of the squad for the West Indies Tests, though he was left out later.

In the middle-order, the onus will be on Eoin Morgan, both as a skipper and as a batter. Moeen Ali would want to resurrect his career after a rough time in the last 12 months. In bowling, Adil Rashid is the most experienced prospect. The onus will also be on the rest of the bowlers to deliver the goods.

For Ireland, Paul Stirling is expected to hold the key. He knows the art of getting quick runs and in the hour of need, can also bowl off-breaks. William Porterfield has experience on his side and he needs to lend enough support to Stirling. The duo has been a key to Ireland’s success over the years.

Skipper Andrew Balbirnie lends solidity to their batting unit and he has a massive task ahead of him. Kevin O’Brien is also their stalwart as he can turn up with the big shots in the middle overs. In bowling, Boyd Rankin can crank up the pace. The likes of McBrine and Young aren’t the worsts either.

Live Streaming– The match can be streamed online at Sony LIV. 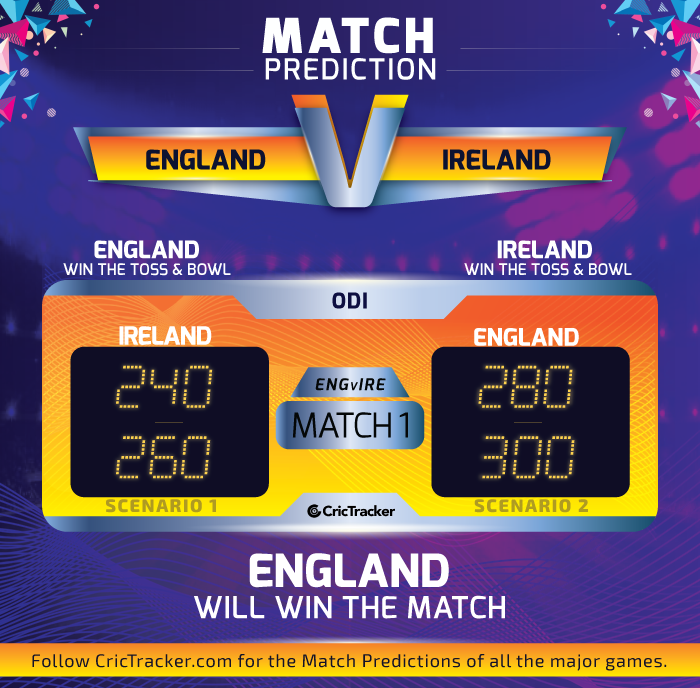