England vs Pakistan Match Prediction – Who will win today’s 3rd T20I match between ENG vs PAK?

Both teams have displayed great batsmanship in the T20I series thus far.

Pakistan and England have been involved in a couple of high-scoring T20Is in the three-match series. After the visitors defied the odds and won the opening game by 31 runs, the Three Lions hit back with a 45-run win.

Moeen Ali ran away with the Player of the Match award after his all-round show. The third and final T20I is set to take place on Tuesday, July 20 at the Old Trafford in Manchester.

The momentum is currently in with the hosts, and Pakistan need to bring forth their A-game to come out trumps. Another high-scoring affair seems to be on the cards for the upcoming encounter.

The pitch in Manchester has been an excellent one for batting over the years. However, it has favoured the team batting second. Nevertheless, keeping in mind the trends in the series, sides may opt to bat first and then put runs on the board.

Liam Livingstone has been an outstanding batter for the Brits in the series thus far. In two matches, the right-hander has notched runs at an average and strike rate of 70.50 and 213.63 respectively. After scoring a century in the first game, he scored 38 runs in the second. If he gets going, Pakistan could be in for a lot of trouble.

Shaheen Shah Afridi has bowled reasonably in the ongoing series until now. The left-arm fast bowler has picked up four wickets at an impressive economy rate of 8.09. Afridi has bowled at an average and strike rate of 14.50 and 10.70. He needs to produce another decent spell of bowling if Pakistan want to win the series against the Three Lions.

Today’s match prediction: The team, batting first is expected to win this match. 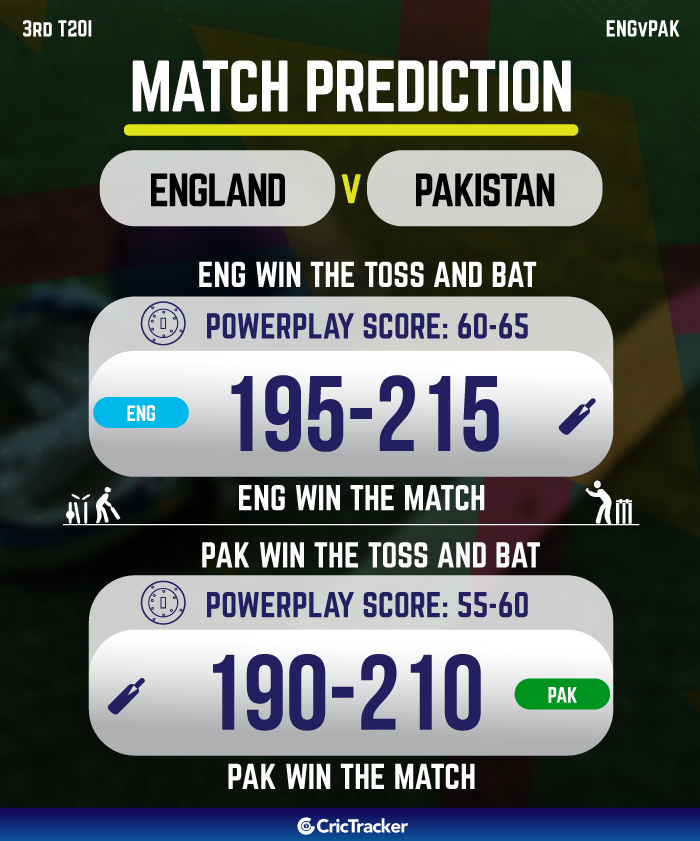