The Lankans have a lot to think about going into the must-win contest at the Kennington Oval.

Sri Lanka didn’t have much to cheer for in their opening ODI against England at the Riverside Ground in Chester-le-Street. Losing the match by five wickets, they fell 0-1 down in the three-match series.

The Eoin Morgan-captained Three Lions chased down the target of 186 with as many as 91 deliveries to spare. The second game is set to be played on Thursday, July 1 at the Kennington Oval in London.

The Lankans, who are depleted due to the absence of some players due to various reasons, need to be at their best to have any chance of drawing the equaliser. The Brits, on the other hand, would be looking to continue with their winning run.

The pitch in Kennington Oval has been a fairly sporting one over the years. The average score at the venue suggests that bowlers and batsmen will have their say in equal proportion.

The hosts won’t mind bowling first again after their performance in the opener. There will be intermittent clouds, but with a minimum chance of rain. The temperature will be around 19 degrees Celsius.

Playing Combinations for ENG vs SL

Joe Root, on Tuesday, completed 6,000 runs in ODIs and has an average of 50.76 in the format. He looked in excellent touch in the first match as he stayed unbeaten on an 87-ball 79 with the help of four fours.

He helped England make a recovery after the hosts were reduced to 80 for four in the 12th over. Keeping in mind his form, Root will be expected to play a similar hand next time.

Chris Woakes was a tough nut to crack for the Lankans in the opening encounter. In his first spell, he picked up the wickets of Pathum Nissanka and Dasun Shanaka. Later, he came back to get rid of Dhananjaya Lakshan and Wanindu Hasaranga.

Moreover, the speedster conceded only 18 runs at an incredible economy rate of 1.80 and churned out as many as five maidens. 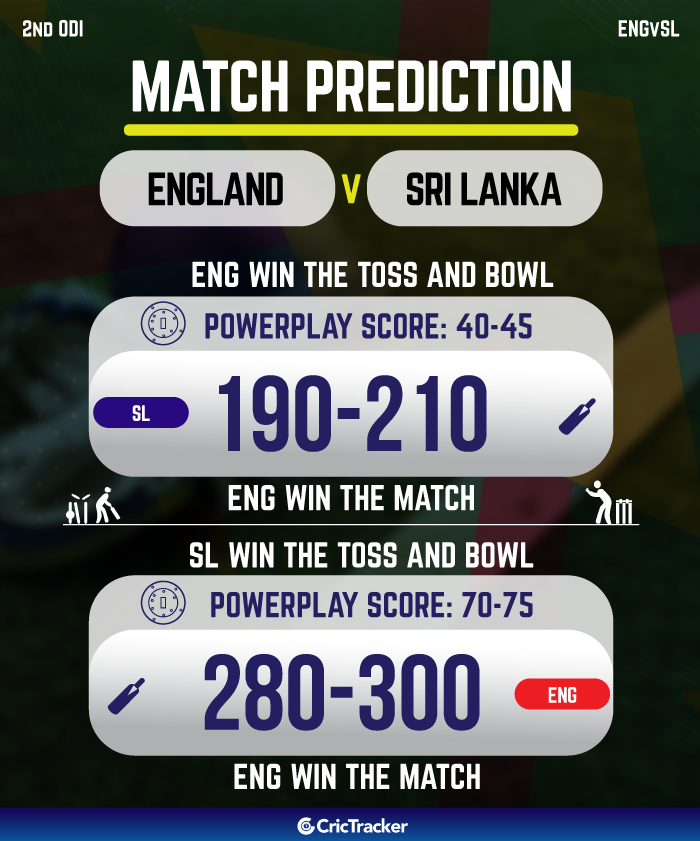