ENG vs SL Match Prediction - Who will win today's match?

The Lankans have plenty to think about going into their must-win affair on Thursday.

England started their three-match T20I series against Sri Lanka as the favourites and they played like one in the first game. On Wednesday, June 23 at the Sophia Gardens in Cardiff, the Eoin Morgan-led Brits won by eight wickets with 17 balls left.

After their bowlers restricted the opponents to a modest score of 129 in 20 overs, Jos Buttler’s unbeaten fifty took them over the finishing line. The second T20I on Thursday, June 24 is a must-win affair for the Lankans.

Barring Dasun Shanaka and Wanindu Hasaranga, none of the visitors’ players could keep the Three Lions in check. Though their bowlers tried their hearts out, it’s their batting that needs resurrection. Kusal Perera had a tough time in the Bangladesh ODIs and he’ll be looking to make amends in the next encounter.

The pitch in Cardiff was a reasonable one for batting as the England batters scored over 60 runs in the powerplay, though the Lankans struggled on the same strip. Batting second should be the way forward.

There will be intermittent clouds with chances of rain around 7 PM. The temperature will be around 16 degrees Celsius with the humidity in the 60s.

Playing combination for ENG vs SL

Jason Roy would be disappointed after he got out to Dushmantha Chameera in the last game. He was batting on 36 off 22 at a strike rate of 163.64 with four fours and one six.

He was also involved in an 80-run stand for the opening wicket with Player of the Match Buttler. The right-hander would be looking to make his start count and get a match-winning knock under his belt.

Wanindu Hasaranga has been a revelation for Sri Lanka in limited-overs cricket in the last one and half years. In the T20I format, he has shown his class mostly. In the first match, the England batters were circumspect while facing him.

In four overs, the leg-spinner gave away only 12 runs at an economy of three, albeit he couldn’t get a wicket. Hasaranga, however, would be looking to make amends with the bat. 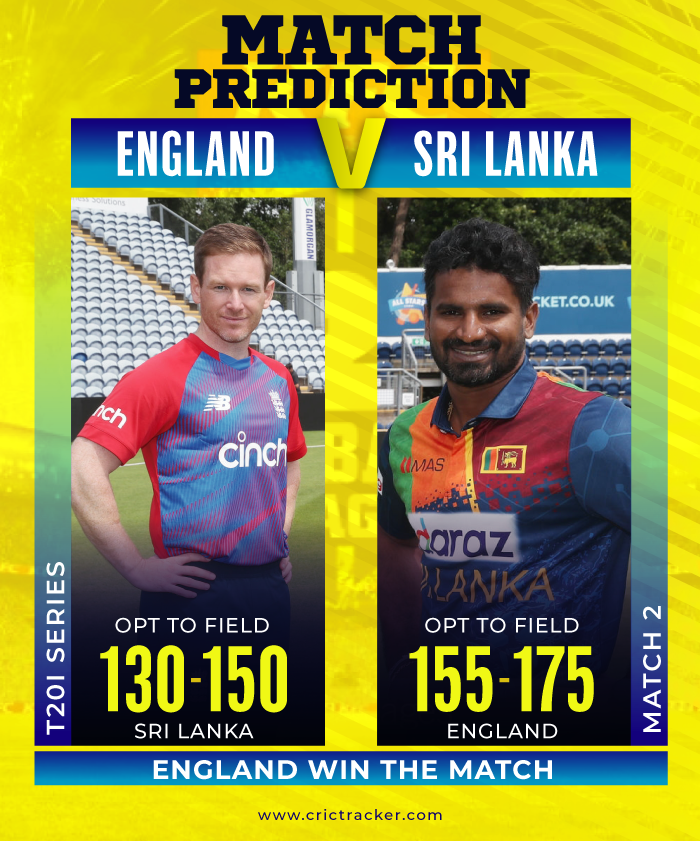