The hosts might want to bat first after chasing down targets in the first two ODIs.

England have already sealed the fate of their three-match ODI series against Sri Lanka with an eight-wicket win on Thursday at the Kennington Oval in London.

The Three Lions have already won five matches in a row and would want to clean-sweep the ODIs after their 3-0 victory in the T20 format. The last and final ODI is scheduled to take place on Sunday, July 4 at the County Ground in Bristol.

The Lankans have had a disastrous campaign thus far, but have ODI Super League points to play for in the upcoming contest. Evading a series whitewash won’t be easy for them by any stretch of the imagination.

The pitch at the County Ground has been a fairly decent one for batting. Hence, the bowlers are expected to find life difficult even in the final game. Picking up wickets with the new ball will hold prime importance for both sides.

After chasing down targets in the first two matches, the Three Lions might want to bat first and then put pressure on the Lankan batting.

Playing Combinations for ENG vs SL

Joe Root has been England’s standout batter in the tournament. Having scored 147 runs, the Test captain has shown the utility he brings to the fore in the 50-overs format.

He is yet to get out in the series and the Lankans, somehow, have to find a way of getting rid of him. A strike rate of 84.48 shows that he hasn’t found run-scoring tough until now in the series.

Though Sam Curran picked up his maiden ODI fifer in the previous game, it’s David Willey, who’s the top wicket-taker in the series. The left-arm fast bowler has picked up seven wickets from two matches at an economy rate of 5.40.

After getting three wickets in the first ODI, he picked four scalps last time around. The Lankan batters need to play him with a lot of caution. 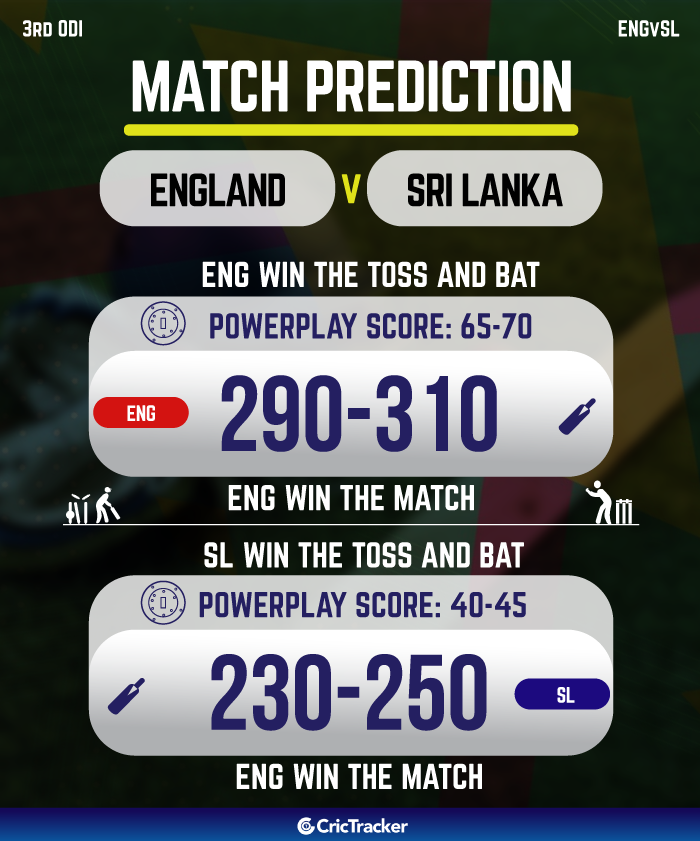