Bravo led the Maratha Arabians to their maiden title in the recently concluded T10 League.

Dwayne Bravo, the former West Indies all-rounder bid adieu to international cricket back in 2018 but is actively participating in different leagues. He is also regarded as one of the best all-rounders across the globe and is an asset to any side in the world. The 36-year-old was also the part of CSK on a couple of occasions when they lifted IPL trophies.

Bravo added a new trophy to his cabinet winning the T10 League and shared his happiness with his fans. But, one fan came out of blue in order to mock him and ended up getting a fitting reply from the former international cricketer. In the recently concluded T10 league, the former all-rounder played for Maratha Arabians and was also appointed as the skipper.

He led the team from the front in the final against Deccan Gladiators and helped his side in becoming the champion. In a format dominated by the batsmen, Bravo registered amazing bowling figures of 2/16. His brilliant bowling spell helped his side to restrict Gladiators from posting a big total batting first.

Later on, the batsmen did their job brilliantly and outclassed the score in 7.2 overs that helped the Arabians lift their maiden title. After the final match concluded, Dwayne Bravo took to his Instagram handle in order to cherish the moments with his fans and also called himself Mr Champion.

He shared a still along with his teammates and wrote, “Officially I’m now Mr Champion big big congratulations going out to my entire teammates and management staff on winning @t10league 2019!!!! @marathaarabians we’re now Champs,”

However, a fan came and tried trolling the all-rounder and commented on Bravo’s post, “But MR CHAMPION has not won a WORLD CUP YET”.

The comment didn’t go down well with Bravo, who gave a quick but fitting reply saying, “I have 2 T20 WC titles smarty how much u have just have a lil respect my friend you don’t have to be a Djbravo fan but you should at least have some knowledge before u open your mouth.” 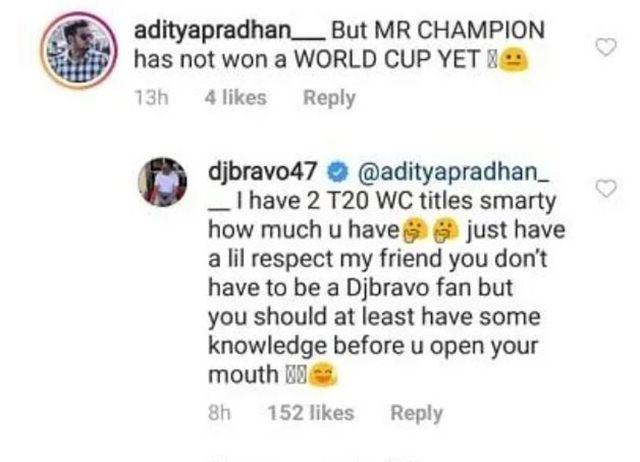