Pick more UAE bowlers in your team as Jersey batsmen might not be able to handle the heat. They will definitely get all-out.

The 21st match of the 2019 ICC Men’s T20 World Cup Qualifier will be played between the United Arab Emirates and Jersey at the Sheikh Zayed Stadium Nursery 1 in Abu Dhabi.

The hosts of the ongoing ICC T20 World Cup 2019, UAE have stormed back into the contest after losing their opening game to Oman. The team led by Ahmed Raza has comprehensively defeated Ireland and Hong Kong since then. Their next challenge is Jersey who won against Nigeria by 69 runs but went down to Canada by 53 runs.

The UAE are on top of the points table in Group B and will have to continue their good work to remain in top three. Jersey, on the other hand, will have to play out of their skins to go up from the fifth position. They still have to play against some of the top teams apart from the UAE and can’t afford any blip from here on.

Not much has changed in terms of the weather forecast Abu Dhabi. It will continue to remain hot while there is no chance of rain. The temperature will hover around 32-34 Degrees Celsius during the match timings according to AccuWeather.

The teams batting first at the venue have racked up scores in excess of 170 so far in two matches. The trend is expected to continue for this game too. Chasing is tough on this pitch given that the ball turns a lot later in the match.

Average first innings score: 179 (2 matches at the venue so far)

Rohan Mustafa and Rameez Shahzad are a must in your Dream11 Fantasy side after their performance so far in this tournament. Ahmed Raza is also doing well with the ball and he should continue to pick up wickets in this game too. For Jersey, Jonty Jenner has been consistent with the bat so far. 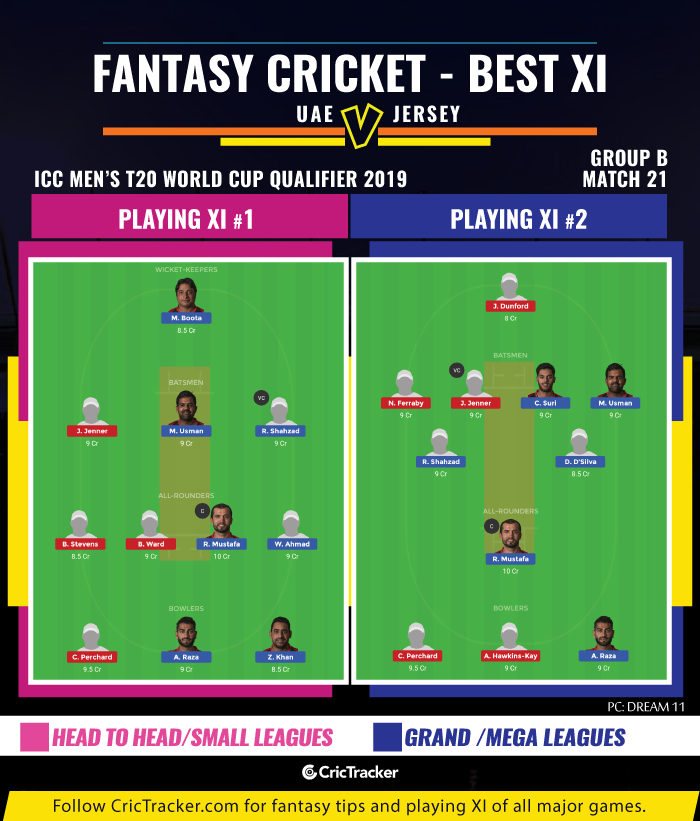 Pick more UAE bowlers in your team as Jersey batsmen might not be able to handle the heat. They will definitely get all-out. If the UAE bowl first, then picking only the top three batsmen in your Dream11 Fantasy team would be wise.

The UAE are expected to win this match.