Vijay Shankar doesn’t have a fracture in his forearm and he may get a chance.

India had a horrendous outing in their first-warm match of the World Cup against New Zealand at the Kennington Oval in London. The Men in Blue couldn’t handle the Kiwis fast bowlers, especially Trent Boult and got bowled out for a paltry 179. The bowlers tried hard but to no avail. Their second and final warm-up fixture is against Mashrafe Mortaza’s Bangladesh at the Sophia Gardens in Cardiff.

The Tigers, on the contrary, would be disappointed after their opening practice game against Pakistan didn’t see a single ball being bowled due to persistent rain. Mortaza’s men’s confidence would be on the higher side as only a few days ago, they beat the Windies in the final of the tri-nation ODI series in Ireland. They remained unbeaten and it was also their maiden victory in a multi-nation tournament.

There is a prediction of rain from 9 AM onwards and is speculated to continue until 7 PM. The atmosphere will be nice and cool with the numbers around the 17-degree mark. The humidity won’t be on the higher side.

The first warm-up saw 338 runs being scored by South Africa and even Sri Lanka scored at almost a run-a-ball. Only six out of the 20 completed ODIs were won by the team, batting first. A high-scoring affair seems to be on the cards tomorrow on a decent batting-wicket in Cardiff.

It’s high time India’s top three- Rohit, Dhawan and Virat- get some runs under their belt. The encounter is also a crucial one for KL Rahul in order to make the playing eleven in the main round. Vijay Shankar doesn’t have a fracture in his forearm and he may get a chance. Kedar Jadhav is another player who’ll want to get on to the field after recovering from the shoulder injury.

The Tigers have an impressive bunch of players and it will be a challenge for the management to make a choice. It’ll be interesting to see who between Liton Das and Soumya Sarkar opens with Tamim Iqbal. Mosaddek doing well in the tri-series has also created a happy headache for the team. Newcomer Abu Jayed Rahi has done well in the limited opportunities and he will want to get another chance. 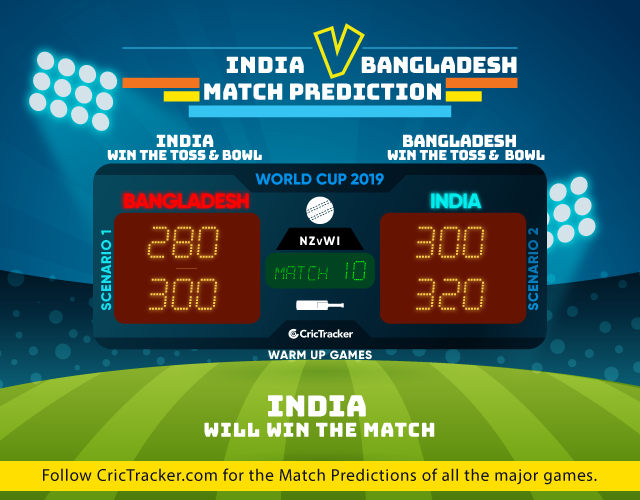