There’s no update on Shannon Gabriel, who walked off after bowling only two balls.

New Zealand started their World Cup campaign on a happy note at the Kennington Oval in London. The Kane Williamson-captained unit managed to beat India by six wickets with 77 balls to spare. The track assisted the pacers initially and Trent Boult ran through the Indian batting line-up without dropping much sweat. Even James Neesham and the other pacers were exceptional.

The Kiwis are next scheduled to play the Windies at the County Ground in Bristol and it’s the last chance for both the teams to get their combination sorted. The Jason Holder-led Windies lost the unofficial warm-up versus Australia in Southampton and were unlucky as their first warm-up game was called off due to persistent rain. Holder’s men have looked jittery from the tri-nation series in Ireland.

There is a prediction of a heavy downpour from morning 9 AM to evening at 7 PM. Hence, there might as well be another washout tomorrow. The temperature will be around 17 degrees Celsius with the humidity hovering in the 50s and 60s.

The first game wasn’t a high-scoring affair, but the track in Bristol turned out to be a good one for batting on the second occasion as the Proteas scored 95 in 12.4 overs. The strip also had something for the fast bowlers, who generated prodigious bounce time and again. A similar surface is expected this time as well.

The Kiwis batted well in the last game with skipper Williamson and Taylor scoring half-centuries. Guptill and Munro couldn’t score big and they’ll be looking to make amends. The likes of Blundell, Neesham, Latham and De Grandhomme will be keen to get on the park. In the bowling department, Matt Henry didn’t get a chance against India and the Black Caps will want to test him out.

The Caribbean team had a rather indifferent outing versus the Proteas with the ball. Five pacers were tried and each of them went wicketless. There’s no update on Shannon Gabriel, who walked off after bowling only two balls. Their batsmen had an indifferent outing in the unofficial warm-up and they will be keen to get accustomed to the conditions and the pitches before the main round starts. 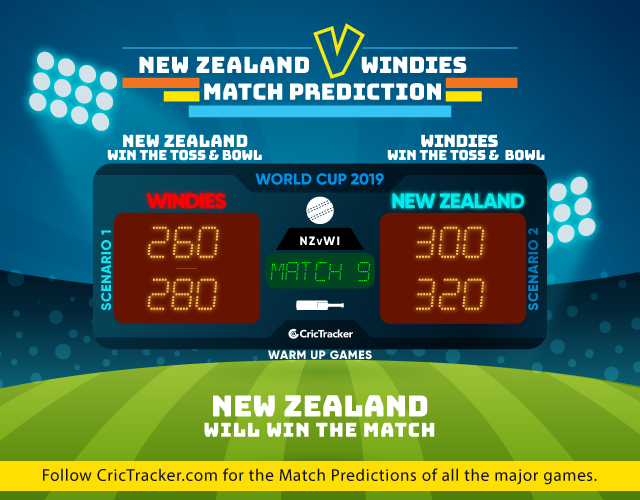