Steve Smith scored 116 off 102 balls with 8 fours and 3 sixes against England.

Australia’s win over England in the first warm-up matches would be a morale booster for the former. But the hapless English side missed quite a few players due to fitness issues. Steve Smith’s century is the biggest take away for the defending champions of the ODI World Cup as the former skipper is expected to play a key role at No.4 position. Albeit the absence of Aussies main bowler — Pat Cummins and Mitchell Starc — the rest did a decent job.

They will face Sri Lanka in the 2nd warm-up which will also be played in Southampton. The Lankans recorded their 6th consecutive one-dayer defeat against South Africa to whom they lost by 87 runs in the warm-up fixture and were defeated 0-5 in the ODI series this year. New Lanka captain Dimuth Karunaratne’s performance with the bat was a confidence booster for his side as he struck 87 off 92 balls laced up with 12 fours.

The 7th warmup game of the ICC World Cup 2019 will be played between Australia and Sri Lanka at the Rose Bowl in Southampton.

Bristol and Southampton witnessed two of the three high scoring ODIs ever hosted by England earlier this month. However, the same pitches were quite dry in the warm-up games. The game between Australia and England in Southampton saw 280+ scored matches by both the teams. However, a fresh track could well produce 300+ totals like in the England-Pakistan series.

Avishka Fernando twisted his ankle while Isuru Udana got hit on his right arm.

Steve Smith has been consistent in Australian colours since his return. He has scored 75+ in each of the last four one-day games played this month for the Aussies. He scored 89 not out and unbeaten 91 in the last two matches for Australia XI against the New Zealand XI. Smith followed it with a 76-run knock against the Windies in the unofficial warm-up and a well compiled 116 on Saturday against the hosts. He could continue his form if he gets to bat at No.4 once again.

David Warner will be eager to make count against the Sri Lankans after missing out on a big knock against England while Steve Smith is trustable in his current form. The Lankan top-order players Dimuth Karunaratne and Kusal Mendis made a good start with the bat against South Africa. 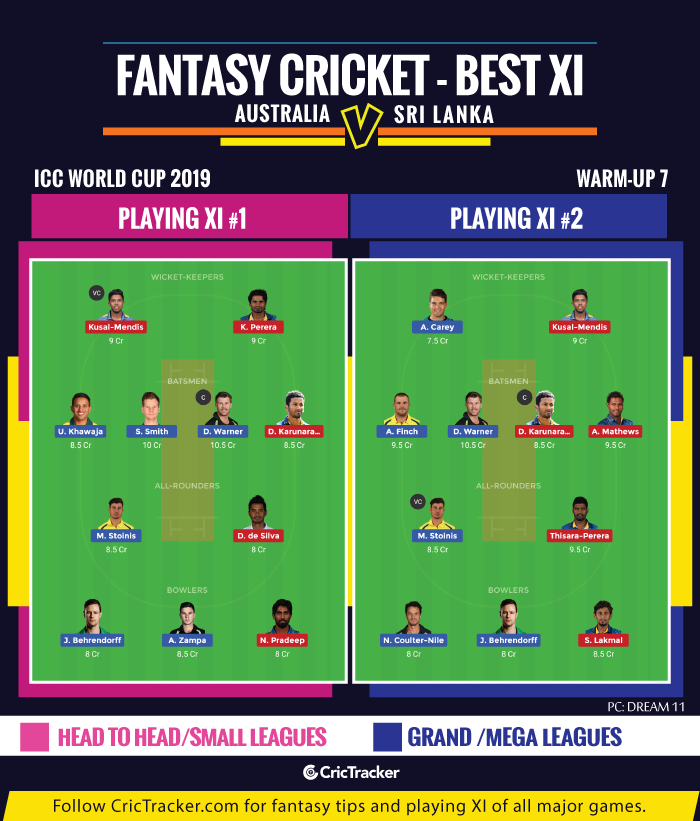 Lasith Malinga didn’t take part of the ODI against Sri Lanka neither bowled in the first warm-up. The veteran pacer might preserve himself for the main tournament. Australia might not rest Smith as the former Aussie captain didn’t have much match time as this level.

Australia is expected to continue its success by defeating Sri Lanka in the second warm-up.