Here is the guide to select the Captain and vice-captain for Dream11 Fantasy.

In the humdinger of a match against Australia, the home team England couldn’t pull above their weights. The side, after having been so dominant all this while, lost the match by 12 runs. In the absence of Eoin Morgan, the middle-order appeared slightly weak. As they head into the next game against Afghanistan, the Brits have got some serious injury scares. There hasn’t been any update as yet on some of their match-winners.

The likes of Eoin Morgan, Mark Wood and Liam Dawson could be rested. Since Jofra Archer came out to bat in the last game, there might be a chance that he will play here. Afghanistan, on the other hand, was excellent in the last match against Pakistan. A good performance in this game will give them massive confidence ahead of the tournament. Since some of England’s top players might not play tomorrow, the Afghans will also look at this as a wonderful opportunity to stun the hosts.

Here is the guide to select the Captain and vice-captain for Dream11 Fantasy:

Joe Root, who didn’t play against England, is likely to take the field versus Afghanistan. The English Test skipper could bat at number three in the match. In the recent series against Pakistan, he scored one fifty and got into the forties twice in four innings. This match will be crucial for him before the tournament opener against the Proteas.

Jos Buttler is one of the best batsmen in the England team right now. He scores at the great strike rate which might help you gain some additional points as well. In the last match, the wicketkeeper-batsman scored 52 runs from 31 balls, took one catch and inflicted one stumping.

Rashid Khan is possibly one of the best leg-spinners in the world at the moment. Oppositions fear him and try to see his overs off. Thus, Rashid bowls at a great economy. Many of the English players don’t really read wrist spin and the 20-year-old will be bowling 10 overs. Hence, he has a great chance to back the two wickets he picked in the last game with a few more this time.

Mohammad Nabi is the perfect all-rounder whom you’d want to have as the captain of your team. He will complete his quota of 10 overs on most occasions. Also, he is an important part of the Afghan batting line-up. Nabi picked up three wickets and scored 34 runs in the last match.

Jason Roy registered two fifties and one century in the last three ODIs that he played. In the practice game against Australia, he mustered 31 runs before being dismissed. The English opener is in fine nick and must be in your side. If possible, you can also select him as your captain or vice-captain.

For Afghanistan, it was Hashmatullah Shahidi who took his team through the winning line against Pakistan. He absorbed all the pressure and stayed there right till the end. Even though he took 102 balls to score 74 runs, he made quite an impact. Yet again, he will look forward to playing a valuable knock for his side. 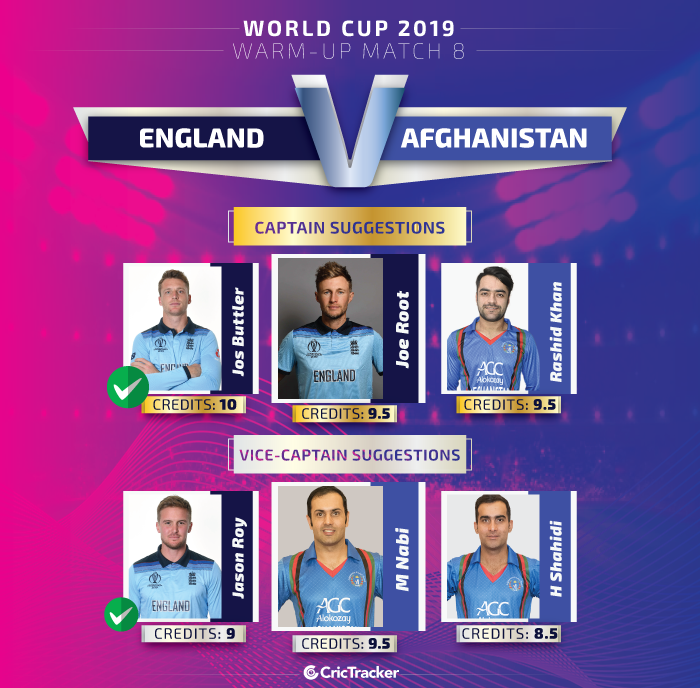