In Numbers: Jaydev Unadkat's miserable run for the Rajasthan Royals

In Numbers: Jaydev Unadkat’s miserable run for the Rajasthan Royals

The Rajasthan Royals continued to trust the left-arm pacer despite being poor in the last season.

For the 2nd time in a row, Jaydev Unadkat has let down the Rajasthan Royals who invested a lot on the pacer at the IPL auction. RR placed the highest bid of Rs 11.5 crore on Jaydev for the 2018 edition but the Saurashtra paceman picked up only 11 wickets from 15 games at an economy rate of 9.65. The Rajasthan franchise has spent as much as 19.9 crores on Unadkat across the last two seasons. However, he has returned with only 17 wickets from 23 matches (so far) instead and conceded runs with 10+ economy rate.

The Royals trusted the left-arm pacer despite being poor last season. They released Unadkat from the squad initially and bought him back for 8.4 crores at the 2019 IPL auction. His numbers in the ongoing season are even worse as the 27-year-old has only six wickets to his name in this season in the eight matches he has played.

Unadkat was dropped from the playing XI for two matches due to his miserable performance with the ball. He has been hit for as many as 18 sixes in the tournament thus far and the economy reads 11.04. 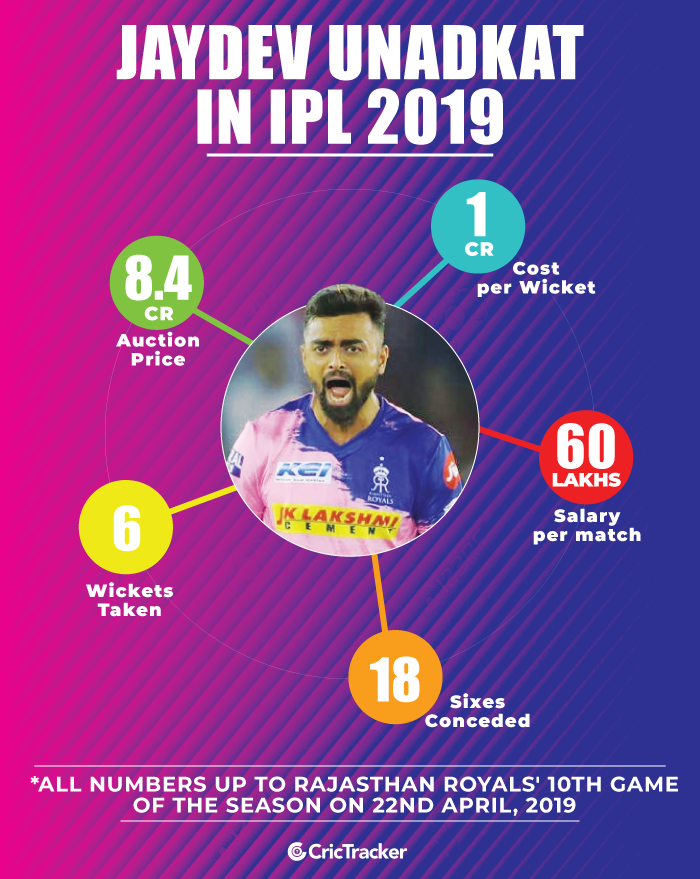 His auction price of 8.4 crores equates to an average of 60 lakhs per match considering 14 games a team is supposed to play in the season. After RR’s ten matches, Jaydev only has six wickets to his name. This equates to Rs 1 crore per wicket cost for the franchise. Interestingly, this ratio is slightly better than what it was in the previous season. His 11 wickets in 2018 cost the team Rs 1.05 crores per scalp.

47 – In the 23 IPL matches for RR, Unadkat has 17 wickets at an average of 47; the 5th worst for any bowler for a team in the T20 format. (Min: 15 wickets) His bowling average for RR is also the 2nd worst behind Mohammed Shami’s average of 50 for the Delhi Daredevils/Capitals.