In both the games thus far in the series, the chasing teams came out trumps.

After the crushing defeat in the opening game, India managed to draw an equaliser with the seven-wicket win over England in the second T20I at the Narendra Modi Stadium in Ahmedabad. The game saw two debutants- Ishan Kishan and Suryakumar Yadav- for the hosts, and the exuberance of youth from them, especially the former, took the Men in Blue over the finishing line on Sunday night.

Kishan’s blistering 56 coupled with Virat Kohli’s unbeaten 73 trounced Eoin Morgan and Co. With the series being levelled, both the teams are now set for the third game on Tuesday, March 14 at the same venue. The Brits had their moments in the game, but they failed to keep their opponent on the mat. A loss for either team could make their job tough going into the last two matches of the series.

The pitch in Ahmedabad has been a belter for batting thus far. The pacers have had a bit of help from the surface, but overall, the bowlers haven’t had much to cheer for. Moreover, in both games, the teams, batting second came out trumps. The temperature will be around 31 degrees with the humidity in the mid-10s.

KL Rahul had a torrid time in the first two games where he failed to reach the double digits. In the previous game, he had a tough time while facing Sam Curran. The Karnataka-born would be looking to make amends and get back to form. The fact that he’s a class act can’t be undermined by any means.

Jason Roy has looked in ominous form in the ongoing series. In the first two games, he got scores in the 40s and helped England make utilisation of the powerplay. But he would be disappointed after not being able to score a fifty thus. On a decent batting strip, he would be looking to get a massive score. 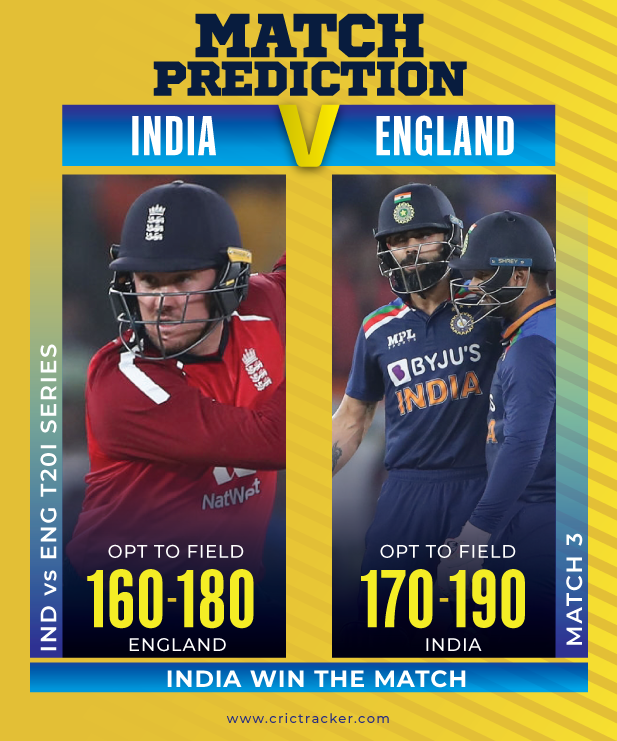