Having played a handful of ODIS before April 2018, Papua New Guinea (PNG) joined the rankings list and The Netherlands will have to play two more ODIs to enter the rankings.

The International Cricket Council (ICC), on May 2, released the updated rankings of the ICC ODI teams and the ICC Test teams. This updated list sees Team India and England retaining their top spots in Test and ODI rankings respectively. The annual update sees the series results for the year 2015-16 removed and outcomes from 2016-17 and 2017-18 are weighted at 50 per cent.

The Indian team was on a roll in the mentioned period of time and at the beginning of 2019, registered its first Test series win in Australia while giving tough competition to South Africa and England. However, the updated ICC Test rankings see their lead over second-ranked New Zealand being reduced from eight to two. Meanwhile, in the 50-over international cricket rankings, India is just behind top-ranked England with the point difference reduced to just two points in a table that was expanded.

India’s 3-0 win over South Africa and 2-1 win in Sri Lanka being purged as part of the 2015-16 season are being purged and it results in them losing three points in the lead over second-ranked New Zealand team, who benefitted from their two 2-0 defeats to Australia being removed from the rankings, gaining them three points.

On the other hand, England has overtaken Australia to the fourth position and are on 105 points. The other major development in the updated rankings saw the points gap between seventh-placed Pakistan and eighth-placed West Indies being trimmed from 11 to 2 points.

No.1 ranked England will need to win against Ireland in their one-off ODI and then beat Pakistan 3-2, if they wish to go into the upcoming ICC World Cup as the No.1 ranked team, given their lead over second spot holders India has been reduced to just two points. They can lose to Ireland but then will have to beat Pakistan 4-1 or better to enter the mega ICC event as no.1 ODI team.

South Africa become the no.3 ranked team, taking over from New Zealand and West Indies move ahead of Sri Lanka to become seventh-ranked ODI team. In other new additions, Papua New Guinea (PNG) join the rankings immediately having played a handful of ODIS before April 2018 and Netherlands will have to play two more ODIs to enter the rankings. Three of the four teams which were awarded ODI status at the end of the WCL Division 2 will join the rankings once they have played the obligatory eight qualifying matches. 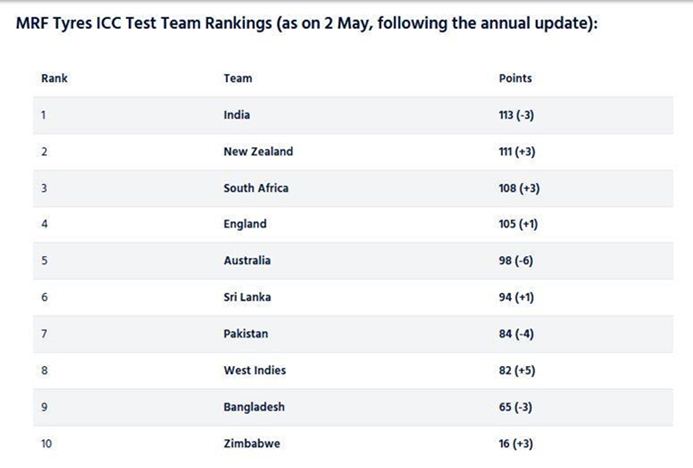